Tonight Abstract Puzzle got a slight refresh, removing some expired App Store links, as well as adding headers for “Forthcoming” games Puzzle Prison and ActionGo, and “Retired” games ActionChess and Oppo-Citrus that were removed from the app store last September.

I also added Root Down to the lineup, and changed some wording here and there.

Sadly, For The Win will be moving from “Mobile Board Games” to “Retired” sometime in the next month or so. I got the same email from Apple about it as I got for the other two games. I don’t have time to update it to support all the new screen sizes (and that app in particular would probably require some new graphics).

Here are the things that changed in Oppo-Citrus 1.1. (Waiting for review with Apple.)

* new TAP control scheme – Tap instead of drag to place the bottom row. Hopefully this clears up the confusion about how to use the menu. Can be used in-game also.

* There is a now a music track!!! Access volume controls from the pause menu. (But it sounds great, thanks Tori!)

* about screen – added “all apps” button

* Fixed a crashing bug with completing 200% on level 11. This also fixes the “all levels 200%” achievement. (Special thanks to @brackeen for reporting.)

Oppo-Citrus is live today in the app store.

I sort of forgot it was going to be released today, and the app description, which I’d fully intended to replace with something more descriptive, was simply the following:

Oppo-Citrus is a puzzle game with a catchy name!

Drag the row of fruit from the bottom into the middle of the gameboard, and try to make shapes of 4 or more of the same fruit. It’s that easy!

So what I’ve settled on (hopefully it’s beter) is the following:

Oppo-citrus is a puzzle game where you drag a row of fruit squares from the bottom of the screen onto a grid to make shapes of 4 or more of the same fruit. As the shapes are removed and points are scored, additional levels are unlocked. Each level introduces some new mechanic or combination of mechanics. See how high you can score on each level!

Anyway, please consider giving Oppo-Citrus a try. I spent about six months making it (part-time), so I hope it’s worth at least a buck. And let me know if you have any problems or find any bugs. Thanks!

I have been pretty radio-silent around here about Oppo-Citrus as well as the hundred other projects I have going right now. It’s hard to find time to blog when you can’t even find time to do all the coding that you have planned or on your plate.

So yeah, today I sent out a few trusted beta-testers what I’m considering the first “final” version of Oppo-Citrus. Then I fixed a bunch of bugs I found in it. Then I uploaded it to Apple. Here are the screen-shots I settled on using for iTunes: 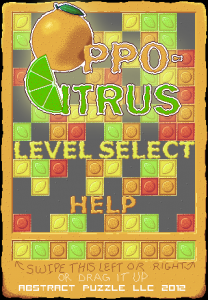 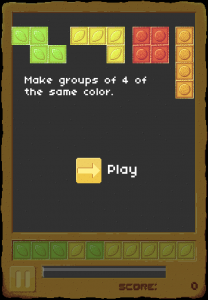 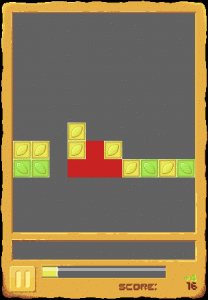 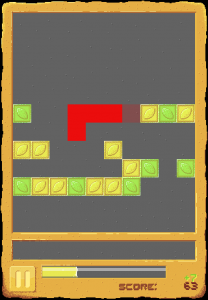 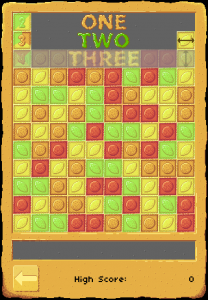 The game has leaderboards for each of its 11 levels, as well as 10 “starter” achievements. (I hope to add about the same number of new achievements in an update in a week or two.) It’s not universal (boo!), but it does support the iPhone 5 screen ratio for those who have one (yay!).

I’m hoping yet tonight to submit a new version of ActionChess for review also. I’ll write another post if I can finish that. 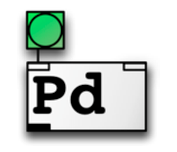 You already saw the logo in my last post, but here it is again for posterity. Cool, huh?

I realized I was procrastinating this post, partly because I don’t know what to write here. I mean, this should be a teaser, so I don’t want to give away all the details, but I also want to be honest about giving an insight into the work I’m doing, both technically, and from a game design perspective.

There was another reason for not writing, a personal one that I normally wouldn’t go into here, but since I said I was going to have this post done a couple of days ago, I figure I should at least mention the real reason it’s later. The short of it is that I haven’t gotten anything done the last couple of days because my 2-year old daughter has been sick. The doctor thinks it might be whooping-cough, which despite having the silliest sounding name of any child’s illness, is actually fairly serious, and can lead to death in very small children. (Fortunately, she’s beyond that age, but it hasn’t been easy, and the most frustrating symptom is coughing until she vomits or gets very short of breath.) Anyway, it’s been a rough first week as an indie. I keep reminding myself that this is at least part of why I wanted to do this. I have the freedom to drop everything now and take care of her as needed. Yes, I might be delaying a product launch by a couple of days, and maybe I won’t make as much money in that time or whatever, but those are tradeoffs I get to make now.

Moving on… Lets start with the basic premise. Here’s the current mockup of the game screen for Oppo-Citrus. The first idea I had for this is still intact: you drag a bar of colored squares into the column above, trying to position it such that you make a shape with four (or more) of the same color. You get points for every unique tetris shape. Right now, you get 1 point for the first one, 2 for the second, 3 for the third, etc. I thought about making additional shapes a multiplier, but since it’s fairly random right now, it seemed like that might be too rewarding. There is skill to it, don’t get me wrong, but a lot depends on getting the right combinations of colors.

The red shape and faded red squares around it are because this screenshot is mid-animation of removing the shapes made from placement of that top row from the gameboard.

As you can see, this first level is just two colors (lemons and limes), and as you might imagine, it’s actually fairly easy to make shapes. The real question is whether you can make enough shapes before filling up the board to progress onto the next level. That half-filled yellow bar below the row at the bottom is the level progress indicator. As you make shapes, it fills up, and eventually you get a screen that asks whether you would like to continue on to the next level or keep playing this one for points. I’ll leave what happens on subsequent levels up for a future post or posts, but in addition to the obvious (adding more colors), I have lots of ideas for powerups and additional game mechanics that actually change the game pretty radically while sticking with the original premise.