I did a quick (~15 minute) presentation at the last MN VR & HCI meeting earlier this week about the hockey game I worked on with/for Visual and Hiway Credit Union. When I polled the audience before launching into it, almost nobody in the room was a developer (it was one of the sparser attended VR meetups in recent memory), so I rushed through most of the technical bits. (Which was the focus of the whole talk!)

Anyway, here are the slides, for posterity:

I’ve been pretty lax on posting here this year. The main reason for this post is that I realized I hadn’t posted about Donuts in Space, which is a game I made explicitly to put on the Donutron. In case you’re not familiar, the Donutron is a donut-inspired arcade cabinet installed at Glam Doll Donuts on Nicollet and 26th in South Minneapolis.

The Donutron currently features all games made by local-to-Minnesota game makers. Donuts in Space was the first donut-themed game on the cabinet, and is a game where you play as a donut rolling around on top of a giant donut floating through space, racing the clock to collect mini-donuts. You can also play split-screen multiplayer. Here are a couple of screenshots: 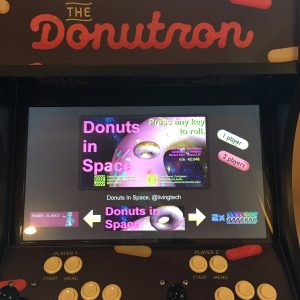 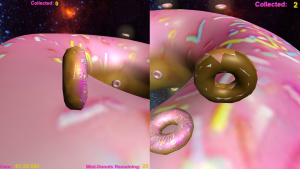 So the other reason I wanted to post is that I keep meaning to write about Unite Austin. First of all, I decided to go to Unite because a) Unity is a good chunk of my freelance work now, (easily 50% in the last year, possibly as much as 80%), and b) it had been a while since I went to a technical conference where I expected to learn anything. I did learn a bunch, mostly about the new Timeline and CinneMachine features built into Unity 2017.x, but also a bunch about various AR stuff. I also got to try out demos of the Microsoft “mixed reality” headset and software, as well as the Meta 2 AR headset.

When I registered for the conference, the website also managed to upsell me on taking the Unity Certification exam while I was there. (So yes, I am now Unity Certified, at least for the next two years.)