I posted a set of rules on BGG this morning for an idea I had for a deck building game with standard playing cards. The game was specifically envisioned for the 2013 Solitaire Print and Play Contest. I think the idea could be expanded to a multiplayer game, but I haven’t done too much thinking about that yet. This was partly inspired by the contest, and also partly inspired by this neat RPG I found (also on BGG) called 52 Card Adventure (also playable with standard playing cards). Anyway, here my rules are, reposted here for posterity:

Setup
You start with 10 cards in your deck, (all 2s & 3s, and two 4s). Also set asside the other 4s and two 5s for scoring. Shuffle the rest of the cards and lay out five of them (the lineup) for purchasing.

Turn overview
A turn consists of the following steps:

Gameplay details
Draw 5 cards from your deck each turn and buy cards using the values of the cards you’ve drawn. For example, you may buy a 10 of clubs by paying a 9 of diamonds and two of clubs. You do not get “change” for your purchase and the same card may never be used to buy more than one card.

You may only buy a card if you are using at least one card of the same suit.

If you buy a card using its exact value (a 6 using two 3s, for example), you may acquire another card from the lineup without paying anything for it. The “same suit” rule does not apply to the free card acquired in this way.

You may acquire as many cards from the lineup in a turn as you can afford/acquire.

An ace may only be acquired as the free card from an exact value payment. Thus if the last card to be acquired is an ace and there are no other cards remaining in the lineup or lineup deck, this is the only way to lose the game. When an ace is in your hand, you may use it to acquire any card from the lineup regardless of suit or cost (other than an ace).

Scoring
Right now, your score is simply the number of turns it takes you to acquire all the cards in the lineup deck.

Lay a 4 and a 5 face-up near (but separate from) the play area. Place the other 4 and 5 face-down on top of them. The 4s are your “tens” counter and 5s are for 1s. On the first and subsequent turns, reveal one of the suit symbols on the face-up 5 by moving the face-down 5 on top of it. When you get to 5, flip the face-down 5 to face-up, and cover the other suit symbols. For six, move the top face-up card to revelal another symbol, etc.

(I hope this is explained well enough. I cannot take credit for this, as it’s how my family has scored euchre for years.)

Feedback desired
I’ve played through this a bunch of times (best score was 12). I think the scoring is the weakest part right now. Definitely looking for ideas on how to improve that. 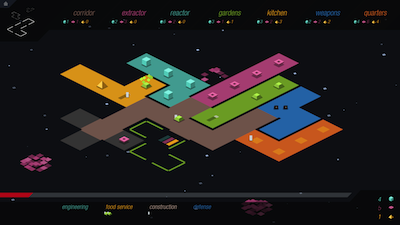 So I was massively looking forward to the iOS release of Rymdkapsel. (Pictured above.) The game first came out on the PS Vita a while back, and I think I only heard about it when it was announced it was also coming to iOS. (Probably via TouchArcade.) Anyway, it came out last week, and I played it exactly twice. For a little longer than 45 minutes each time. There are several aspects of the game that I think are awesome. The music is great, for instance. I also find the visual aesthetic to be simply amazing. There are also several areas where I think the game falls down, and replayability is definitely my biggest concern.

Rymdkapsel is a Real Time Strategy game where you don’t control your units movement, only their tasks. The twist is that you have to place your buildings adjacent to one another, and they’re going to be shaped like Tetris pieces. There are a couple of points around the tetris shaped buildings where I think the game kinda fails. 1) You have to connect your buildings to a pathway (that you also build out of tetris shapes), but however the game determines where that building has a door into the hallway is flawed. Often the doorways will appear in a space that is not the closest to your resources, meaning your workers have to walk farther to get into the room, which can be very frustrating, especially when there are walls adjacent to the walkway much closer. 2) There are very few obstacles to building your (what is it? city? space station? abstract area?), and so the tetris aspect here is pretty minimal. The placement does factor into how long it’ll take your workers to get from place to place, and you want to optimize for that, as well as getting good coverage with your military buildings, but otherwise there isn’t much strategy (or point) in using tetris shapes for the buildings. It does look damn cool though.

My final nitpick is that the game has a very definite difficulty curve, and there is a point after which you basically won’t be able to play much longer. This in and of itself would not be a big deal… but that is the only mode of play. So the game shares this aspect with tetris also, you play until you die, and then you play until you die again. It is a race for highest points, and that’s it. There are exactly 3 achievements in the game. I would love to have seen a lot more achievements. Or some additional game modes. As-is, I will maybe play this one more time to get the third achievement. Maybe.

In other Tetris-related news, my Tetris google alert is BLOWING UP with news about Tetris Monsters, which EA recently announced for Japanese release. I think it’s gotten enough buzz that they’ll probably look into releasing it here, but I’m guessing it’ll be a while. The game is (as far as anyone can tell from the limited information available) essentially a cross between Tetris and Pokemon. I want some more information before I get excited about it, and frankly, EA’s record for taking a franchise and turning it into a freemium mess isn’t very good right now. So I’m not expecting much.