Last weekend was Protospiel MN. After how much fun I had at the Madison protospiel (was it just a month ago!?!?), my expectations for this one may have got away from me. I ended up spending quite a bit of time in the last few weeks prepping new prototypes. Here’s what I brought and tested:

Adam Rehberg and I both brought copies of Thrive in various states of quality. It was interesting to compare his 3D printed pieces to my own. (We are using a new model courtesy of local artist Colin Cody-Waters, and his printer does a better job with it than mine.) At this point, we are more in marketing mode than actual play testing, but we did have some new things to playtest. 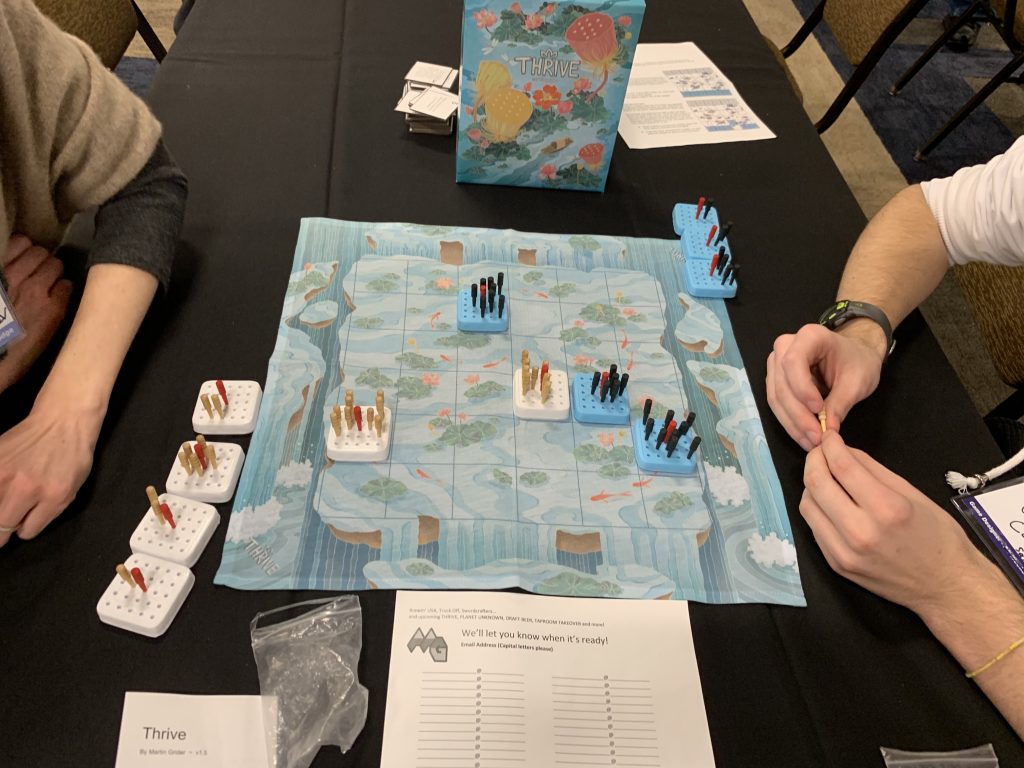 Worth noting that there will be a kickstarter for Thrive at the end of February, or beginning of March, and at least in part to collect email addresses for that kickstarter, there is a Thrive print-and-play contest going on right now over at Adam’s Apple Games.

I managed to get a new “pyramid tile laying / fitting / stacking game” to the table several times. The tiles are (some of them) glued together in 1/4th overlapping shapes and patterns. (This is harder to describe than I realized.) I’ll include a photo of one of the end-game pyramids below, but you can’t really get a sense from the photo which tiles are actually glued together and which are singletons. The idea is that you use the singletons as currency to pay for the larger tiles. One of the last parts left to design was how to score the game, (though I had plenty of ideas), and I got lots of useful feedback on those ideas, as well as plenty of other helpful suggestions from my play testers. One of the games we ended up calculating scores for each player in 4 different ways. None of them fully met my criteria for how I wanted the scoring to incentivize building up rather than out, so I still have some thinking still to do on this one. 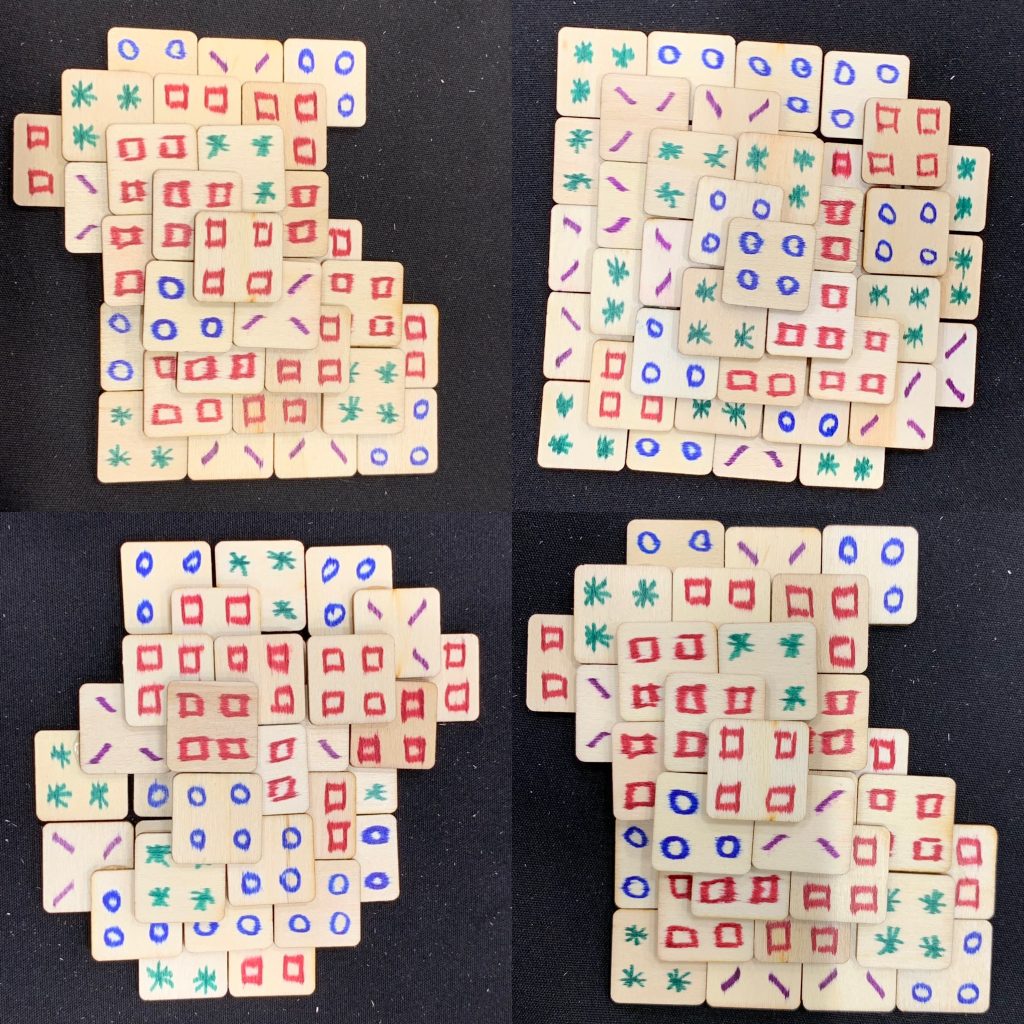 Oh Tetrominoes! – just the blocks – I made a version of this game by gluing 1-inch cubes together (pictured below). It was easy to get to the table, because it just looks and feels really nice, I think. Adam gave me some great feedback about wanting a “qwirkle moment”. And someone suggested having blocking pieces. Next time I play it I want to try where only the three polygons score, and the spaces marked X are blockers. Notably, the game board (with score track) was the first and only thing I’ve ever created in Illustrator, only about an hour of work. 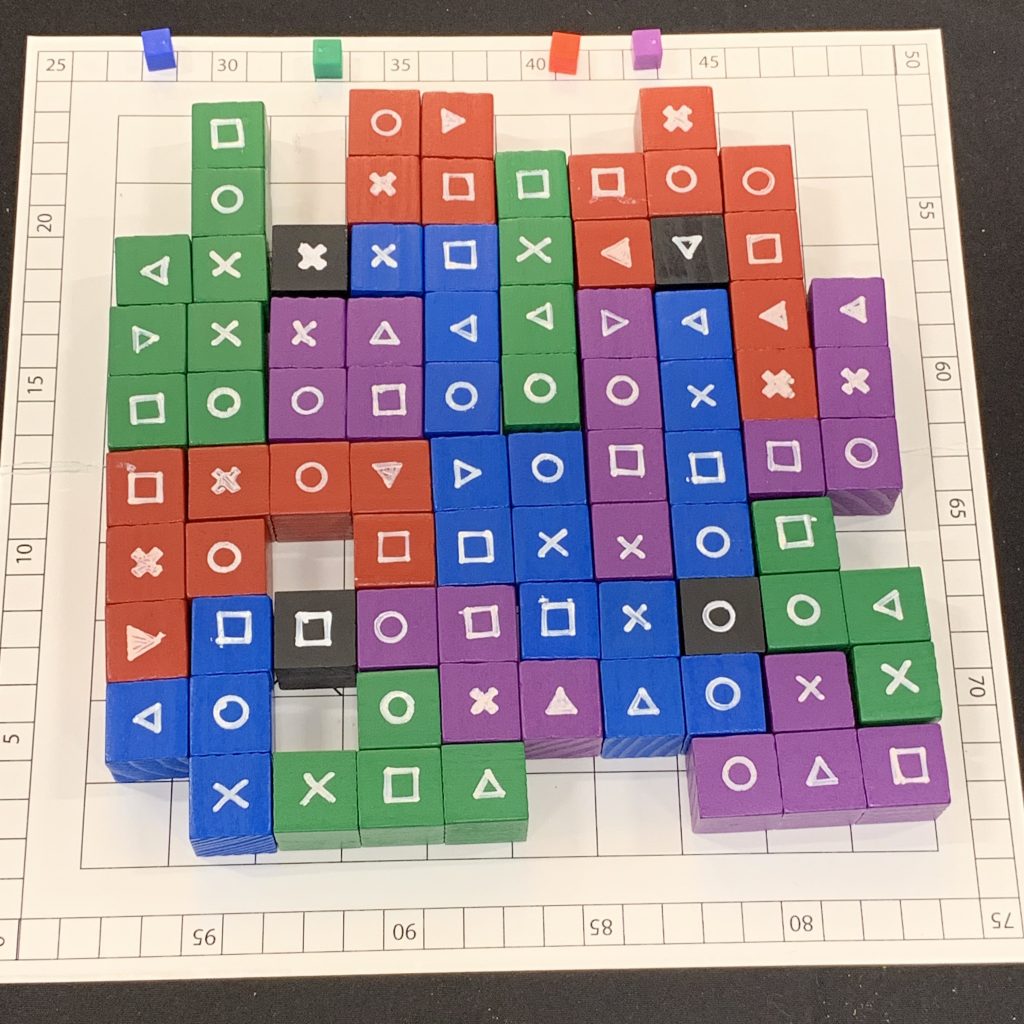 Windrose – I did playtest this again at the convention. There were some new ideas thrown around. I sort of thought this was “done”, but the conversation left me bristling with ideas. I sort of feel like most of them would result in a different game entirely, but that’s not necessarily a bad thing.

I did also bring my Blinks dev kit, which was running my game Takeover. I only actually brought it out on Saturday night, after the main convention hall was closed for the evening. Immediately after we played it, we played Oh Tetrominoes!, and someone paid me the compliment (paraphrased) “You’ve shown me both the most sophisticated (technically), and least sophisticated (physical components) games that I’ve seen this weekend.”

Other highlights:
– My standout game for the convention was a numbers-heavy (but not at all otherwise heavy) strategy game by Patrick Yang. He’s calling it Mathemagical, which is a great name, and I really liked the game.
– I got to play a tetromino stacking prototype called Lots. It was light and quite fun.
– My daughter attended with me on Sunday, and she ended up spending at least an hour (maybe two) prototyping a game in collaboration with another little girl who was there. I think they both really had fun, and there were even some neat ideas they came up with together.