This was my first time at this particular Protospiel. I do think the space was bigger than the MN one, but only by a factor of maybe 1.5x or 2x. I heard tell it was actually more space this year than previous years, but I have no idea if that was true. I also heard there was less of a publisher presence this time around. The only ones I saw, were Adam Rehberg from Adam’s Apple Games, (who I traveled over with), and the GameCrafter (if you count them as a publisher). Of course others may have been there incognito. (Or just less obviously.)

Adam (who is publishing my game Thrive) and I set up Thrive as a blind playtest on one of the back tables. This was the first time it had been shown with (some of) the new artwork, and we got a lot of praise for it. (I’ll post a photo.) I did feel bad briefly on Saturday when it was especially packed for taking up the space, but there was almost always someone playing it, and I had so much positive feedback, both about the game itself, and about doing a blind playtest at Protospiel (which several folks said they’d never seen before), that the feeling was easily allayed. We got good feedback on the rules, and added about 15-20 names/emails to our signup sheet to let folks know about the kickstarter when it happens. (Incidentally, we talked about a date for the kickstarter on the car ride home, and we are currently aiming to have it now in March.) 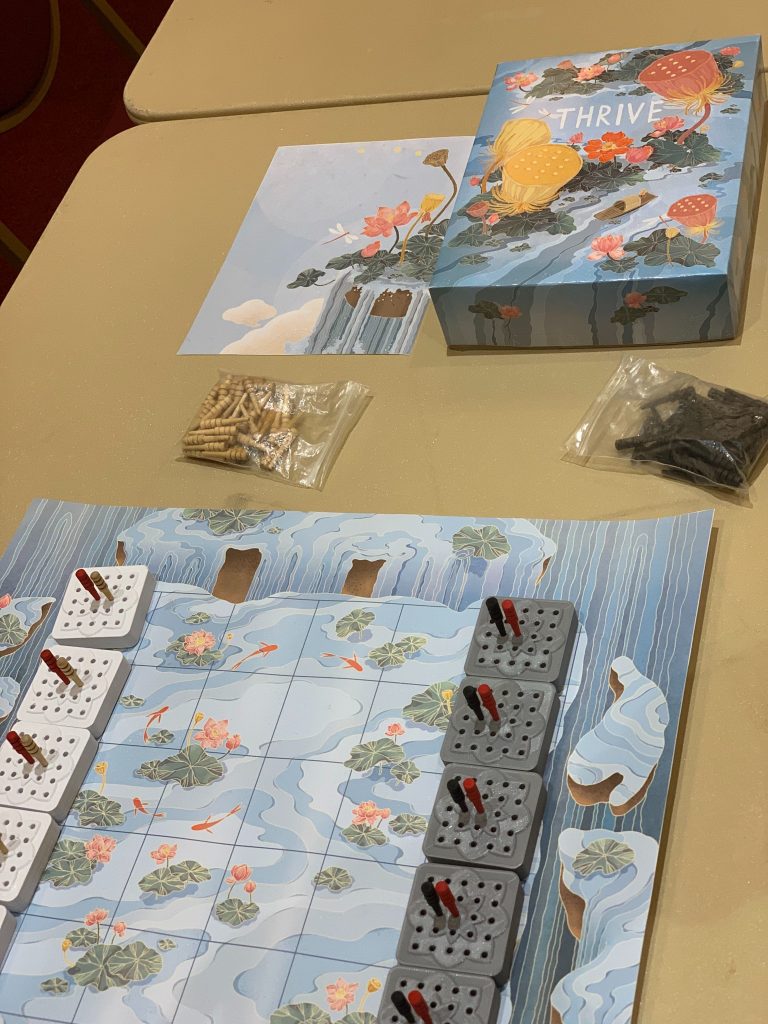 My personal goal was to get more games of my two current favorite designs in, and I got both on the table several times. The first, (with working title Oh Tetrominoes!), was played 3 times to completion, and only actually broke on the 4th play through. While it mostly felt like it works mechanically, I think the consensus was that it’s a bit fiddly, and not especially fun. It’s a mashup of three or four game ideas I had that all feature tetrominoes, and while they are integrated well (I got compliments on this!), they still feel weirdly disjointed, and one of them really feels like the core of the game (which I reluctantly agree with). After the last (failed) gameplay, one of the playtesters actually convinced the rest of the table (including me, but I didn’t need much convincing) to play a game of just that main core mechanic, without the other features. That went really well, and I’m definitely going to pivot the game a bit. (I mean really, I think it’s basically done, but I suppose I should playtest it a few more times to be sure. I’ll probably try and re-use the other mechanisms in a different game… someday.)

I felt like my other game, Windrose, had each playtest go better than the last. My goal for that one had been to play it with 4 players. as It had previously only been tested with two. I got in 2 more 2-player games, 3 4-player games, and one 3-player game (in that order). It really felt like it worked just fine with 3 and 4 players, although after the first 4-player game, we added a rule that changed strategies quite a bit without making the game feel all that different. I do think I prefer it with the new rule. Otherwise, the game didn’t actually need any tweaking, which feels kind of amazing to me. It’s another super simple abstract strategy game, and creating one of those that plays 4-players is really exciting to me. (Probably not something any publisher is going to be interested in, but you never know!)

Other highlights for me include:
– Playing a couple of new-to-me Adam’s Apple Games prototypes.
– A game played with “kite and dart” Penrose Tiles, which really looked cool.
– Seeing, (but sadly not actually playing) Cartographers: A Role Player Tale, which looked like a contender for my favorite take on the emerging “Flip and Fill” genre that is hot right now.
– Having dinner with Nick Bentley, who I have been acquainted with for some time, (I turned his game Catchup into an iOS app a few years ago), but until this trip might not have actually called a friend. We had such great conversations at dinner on Friday that we resolved to do it again on Saturday, and then I managed to convince him to play a couple of games late into Saturday night.

There were way more games that I was interested in trying out than I actually got to sit down and play. I did play a lot of games though, and I hope I gave some good feedback. I’d say the ratio of playing my own games to others’ was probably 40/60. All in all, definitely a great event for me. I’d recommend it, and definitely hope to do it again.