I was musing on game design this morning, and came to a conclusion that I already knew both intellectually and intuitively, but one that I’m not sure I’ve articulated to myself previously: Game design is a creative endeavor. (With all the subjectivity and painful process woes that plague all creative endeavors.)

I’ve always just made games that I myself wanted to play, avoiding the entire camp of game design that suggests your players should be influencing your design. That may sound like an arrogant position to take, but at first it was borne more out of laziness and ignorance than anything else. Until I attended my first GDC in 2012, I didn’t even really realize there were people whose job was game design, and I certainly didn’t realize there were books written on it or — more importantly — people thinking about it academically. It was that revelation, more than any other, that has kept me going back to GDC; I find immense value in immersing myself in game design topics opinions and thinking for a week, not to mention all the networking opportunities.

But anyway, aren’t I also a player? In my opinion, I’m a player whose wants and desires are seriously under-served. (That means my games are probably for a small segment of the market, and I’ve made peace with that. I’m not looking for commercial success… if it finds me, awesome.) I’m not going to cave to the pressure to make games for someone else. Because essentially I feel like that’s compromise. And I think compromise kills art. My vision is no more important than anyone else’s, but it’s also just as important as everyone else’s. And hey, I’m the one making it.

So is this all one big excuse for not accepting constructive feedback? Partly, yes. These thoughts all come in the wake of showing off a new (-ish) board game last night at a local game designer meetup. I haven’t talked about this game publicly before, and this whiny blog post is probably not the place to start, but it was not received well. (In spite of many — at least 10 — fairly successful playtests previously.) Mostly, the feedback last night consisted of ways to change the game entirely, ways to take it in some other direction. Essentially, the playtesters (game designers, but for one) didn’t enjoy the game, and spent a good fifteen minutes after their play trying to brainstorm ways to “fix” the design. Almost all the player suggestions last night involved tearing up the design and making something new out of the pieces. This is something I’ve already done with this particular design at least three, maybe four times so far, and I’m actually very happy with where it’s at right now, so that option is not really on the table.

It’s hard not to take this kind of feedback personally. (Made more difficult by at least one of the designers in question having a lot of problems keeping his feedback constructive.) The whole experience really threw me for a loop, and I spent this morning struggling against an impulse to just put the game away and not think about it for a while.

Perhaps I can salvage this piece by adding a few bullet points about giving constructive game design feedback.

I’m backing up my iPhone in prep for a new device, and one of the things I did was spend ten minutes taking screenshots of every folder, just in case I need to restore things “manually” later. (Actually, I may decide to start “from scratch” on this new device, and I’ll use these images as reference if I need them.)

Anyway, nobody probably cares about my home screen, but I thought these screenshots of my “TetrisLike” folder were pretty cool. Enjoy! 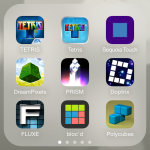 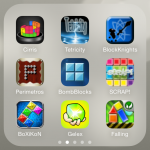 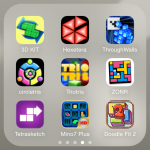 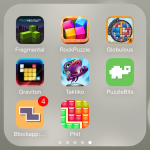 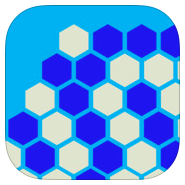 I’ve been meaning to write a post for a while now with pull quotes from the two big Catchup reviews. (It’s kind of a shame I haven’t even mentioned them yet on here.)

But before I get to those, Catchup is free in the App Store today. I’m hoping for a big influx of new players who might then tell their friends about how great it is, and maybe some of those folks will purchase the app tomorrow, when it’s back to $2.99. So if you haven’t already, go download it now! (But if you’re reading this, my guess is you’ve already got it, so thanks for that.)

Anyway, Catchup’s first big review came from Pocket Tactics on the 14th of August, exactly a week after its release. It’s an absolutely stellar review, giving the game 5 out of 5 stars, and I’ll just let some of the quotes speak for themselves:

“Catchup is as elegant as a game can reasonably be, presented in a marvelously user-friendly way.”

“…it’s packed with all kinds of options, some of which are unprecedented in my experience.”

In another quote that I found quite amusing, the author, Kelsey Rinella, also manages to call Nick (the game’s designer) a yahoo, while still complimenting him:

“I am not amused that some yahoo can waltz in and make what I do look easy and sound like a caring, brilliant guy at the same time.”

Catchup’s second big review was from the iOS Game review behemoth Touch Arcade. It absolutely floored me to get a full review on the front page of Touch Arcade, and they gave it 4.5 out of 5 stars to boot. Here are a couple of quotes from author Shaun Musgrave’s review:

“If you’re even a little bit into strategy games, you need to get some Catchup all over your mobile device.”

“There are also a number of achievements set up through Game Center, some of them very cleverly devised to force you to play outside of your comfort zone. That’s my favorite type of achievement.”

The Touch Arcade review didn’t appear until August 22nd, slightly more than a week after the Pocket Tactics review. Another week after that, Catchup was back on Pocket Tactics (on the 29th) for their “Games of the month” for August. Here is another great quote from that:

“The greater the ratio of fidelity to a complex system to rules overhead, the better I tend to like a design. Catchup doesn’t even attempt to satisfy my strongest gaming craving, and yet I feel excitement every time I see the badge saying it’s my turn in a game. It’s like rediscovering excellent vanilla ice cream after years of trying all sorts of tarted-up frozen confections. It’s such pure gaming goodness, without dissonance or unpleasantness of any kind.”

Obviously, I’ve added some of the above to the app’s app store description. (Let me know if you have any opinions about the ones I chose!)

I will probably write another post at some point about stats, including download numbers, and what kind of impact these reviews had on those. But anecdotally, the Pocket Tactics review got us slightly more downloads on the day of the review, (I’m guessing because their readers are closer to our core demographic), but the TA review had a longer impact, for more days. Possibly we fell off the front page of PT faster.