Tonight Abstract Puzzle got a slight refresh, removing some expired App Store links, as well as adding headers for “Forthcoming” games Puzzle Prison and ActionGo, and “Retired” games ActionChess and Oppo-Citrus that were removed from the app store last September.

I also added Root Down to the lineup, and changed some wording here and there.

Sadly, For The Win will be moving from “Mobile Board Games” to “Retired” sometime in the next month or so. I got the same email from Apple about it as I got for the other two games. I don’t have time to update it to support all the new screen sizes (and that app in particular would probably require some new graphics). 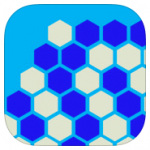 The day is finally here, and my latest game, Catchup has been released for iOS. The game is a two-player abstract strategy game, with asynchronous multiplayer via Game Center.

Here is the app store description:

Catchup is a simple game of surprising turnarounds.

Can you have the largest group at the end of the game? Connect your hexes to master this beautiful abstract strategy game.

Features:
– an interactive tutorial to teach you how to play
– a challenging AI opponent whose difficulty changes as you play
– online turn-based multiplayer via Game Center
– two-player pass-and-play on the same device
– beautiful and haunting music by Tori Kamal
– minimalist graphics with customizable colors
– GameCenter Leaderboards & Achievements
– simple and easy to learn rules and gamplay
– difficult to master strategy

2. Starting with the second player, each player must claim 1 or 2 hexes on their turn.

Catchup is an original Board Game designed by Nick Bentley.

For posterity, here’s the “What’s new in this version” text for the last few versions (because I’ve been submitting all these versions to Apple for approval, these are actually visible in the app store if you dig):

What’s new in Version 0.8.1:
– Spanish, Simplified Chinese, and French localization
– Added a link to the game rules from the game menu
– Lots of bugs fixed in prep for launch!

ActionChess 1.7 has been submitted to the app store. It’s a very minor release, and here are the notes:

I hope you like the new icon, I really dig it!

I’m in the middle of the process of submitting ActionChess 1.5 to apple. There is a ridiculously long list of things this build adds from the last one, which was… oh back in October of 2010. That’s over two years ago, and that means I’m a slacker! Anyway, that list includes:

There are probably about 500 other minor changes. Unfortunately, that list doesn’t include fixing the one or two UI bugs I know about (that annoying flashing that happens *sometimes when the level changes is still there, I’ve seen it). Here’s a list of things I want to tackle for the next version:

* release the more or less completed static-Puzzle mode
* modernize the interface to support iPhone 5, and possibly (hopefully) the iPad
* fix those bugs I mention, and quite possibly give the graphics an overhaul

Yes, an upcoming version of ActionChess will have news items. (You may be holding it in your hands right now!) If so, how sweet that you read this far. Thanks for playing, and if you haven’t already, please subscribe to the mailing list.

As extra incentive for myself (and possibly to drum up some pre-release interest in the next version), I’ve changed the price of ActionChess in the app store to free.

The next version will have Game Center support, as well as retina display graphics and iOS 4 multitasking.

It’s really very close to complete. I just need to copy over all the achievements (there are over 50 of them) from OpenFeint to Game Center. I’m hoping to get to that this weekend.

ActionChess was featured yesterday in a list of apps made in MN — in the Star Tribune.

UPDATE: Here is the entirety of the mention (for posterity):

Cross the line-clearing aspects of Tetris with the moves of chess pieces, and you get this fun puzzle game.

It was featured in the upper left-hand corner of a page with an iPhone in the middle and all the local app icons on it. It ran with another much larger and longer article about MN made apps in general titled Land of 10,000+ apps. (That article also briefly features Clockwork, where I am gainfully employed.) Both were written by Randy Salas, who I do not know and have never communicated with. Thanks Randy!

A new ActionChess update (1.1.5) is in review. Here are the changes in the update:
– Minor changes to help text across the board.
– New scheme for saved games. One save per game mode is allowed. You can return to the menu to save your game, so when you unlock a new game mode, go try it out right away!

If you’ve been paying attention, (and I don’t know why you would be), you’ll notice that the version numbers should all match now also. There was a discrepancy between all the various versions because I wanted to number things 0.1.x, but I’d launched with 1.0 (by default, I just hadn’t changed the string in my plist project file), and since apple only allows upward version number changes, I had been trying to mirror the “real” version number, but with one instead of zero. This is a silly little discrepancy, but I’ve given up and moved everything to 1.1.x to avoid confusion.

As I mentioned in an update to a previous post, I wanted to get “global high scores” and a new “Puzzle Mode” into this update, but both features are proving to be fairly time consuming endeavors. I do have some progress into both tasks. So far, I’ve finished most of the shell for puzzle mode (still needs some UI love, and there are a couple of bugs). I’ve also programmed enough puzzles in to figure out that this mode is totally worth the effort. It is harder to make puzzles than it is to solve them, but I should have some more progress made by this weekend. I’d like to launch the feature with 100 puzzles. I don’t know how realistic that is, but that’s my goal for now.