I’ve often gotten down on myself because I feel my primary form of creativity is taking things that I like from different sources and combining them. I’ve even gone so far as to talk about “combinatorial creativity” as an abstract concept (though I’m not sure I’ve done so in writing anywhere before today – I should look).

Anyway, today I stumbled onto the series of short films called Everything is a Remix, which (after having only watched the first two of four) I would (nonetheless) highly recommend.

I’m not sure I would go so far as to say that literally EVERYTHING is a remix, but I do think most forms of modern media are heavily inspired by (and often remixes of) existing art of some kind. Obviously, my games are no exception. I want to talk more about this idea, and “combinatorial creativity”, but I’ll leave that for a future post. 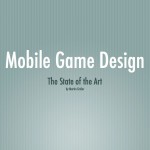 I presented this slide deck on mobile game design (PDF 2MB) last night at our first Mobile Game Developers group meeting. I think the meeting went really well, and I can’t wait for the next one!

So after much discussion yesterday, I finally took initiative, and decided to make an idea a reality that I’ve had for a while now: starting a local meetup for mobile game developers. I set up a google group today, and spammed a bunch of local mailing lists I’m on, including our local IGDA chapter, Mobile Twin Cities, and the Cocoaheads of MN. My co-worker Breon, who is going to be a co-organizer, posted it over at the MN Android Developers Group, and the TC GTUG (Google Technology Users Group). I even have a pending event listing at tech.mn.

We’re obviously casting a wide net, so I hope everyone who might be interested in it gets to hear about it.

But a monthly user group isn’t the only thing we’ve got in the works! I recently stumbled onto the website for Game Camp, a bar camp style conference for game design. Here’s what the website says it’s about:

GameCamp gatherings are for the people who are building that world. It’s for the designers, coders, artists, writers, thinkers and, above all, the players who are making the 21st century the century of the game. GameCamp is about more than making games: it’s about playing them, thinking about them and how they affect our lives for good or for ill.

In the immortal words of Liz Lemon, “I want to go to there.”

We are in the VERY early stages of planning, but right now we’re
thinking this should happen in October of 2012 sometime.

And finally, there was one other game development community effort I discovered this week. I have no organizational stake in NaGaDeMo, (or National Game Development Month), but as a 3-time NaNoWriMo (National Novel Writing Month) alum, I know how powerful these shared experiences can be. And since I’m already working on a number of games, I don’t think it’ll be that great a stretch to start and finish a new one in the month of June.

I’ll definitely be posting more on at least some of these topics in the future. Here is the post about our first Mobile Gamedev Meetup next Tuesday, where you can find the eventbrite link and read about where and when exactly we’re going to be meeting.

A few weeks ago, Kickstarter fairly quietly launched the ability to “follow” other Kickstarter users. I can’t find a blog post to link to, though the feature is mentioned in their “This week in kickstarter” post just before they had their 3rd anniversary post. I’m fairly certain I noticed it, but didn’t think much of it until they called out the “friend finder” they had also created (with some kind of notification in the site’s header).

The long and the short of it is that I linked-up my facebook account and now receive an email when certain of my friends back a project on kickstarter. So far, sometimes this is just noise, but sometimes, as with the AmplifiEar project a couple of days ago, I find a new project that a friend is backing that I’ve never even heard about.

Obviously, the conclusion here is that I want this feature for the app store. Apple already put “social” into iTunes with Ping, and I’m a bit worried that they’re going to say that experiment failed, and not carry it forward into the app store. On the other hand, they bought Chomp recently, presumably acknowledging that they have a problem with app discovery. 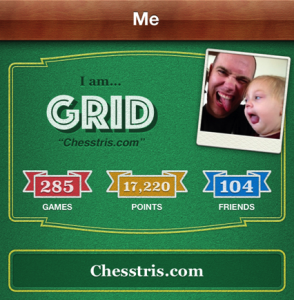 Maybe the correct place for this type of thing is in Game Center, where we already have game recommendations. (Although there is no indication why those games are recommended.) Of course we also have a friends list there. You can even see what games they own, and the ones they’ve played most recently! Why not add the option to get notified when they actually buy these games? Ideally, I want this in email form, because I’m not going to remember to open up the Game Center app with any real regularity. (And a push notification is just silly, for this, I think.)

While I’m requesting Game Center features. (Don’t get me started.) I sure wish I could embed my Game Center profile in this blog post. (I’ll just include a screenshot here instead.)

Here’s the description for my latest app in the app store, the fez translator:

This is a fan-made app to help with the translation tasks that take place in the game Fez for the Xbox. If you want to figure it all out for yourself, read no further!

Essentially, this is meant to help with the task of translating the various glyphs found in Fez. I found it useful, maybe you will too!

I’ll fully admit that the idea was not mine, (my co-worker @breon gets that dubious honor) but all the implementation choices and decisions around those were mine. I basically spent about 2 hours on this app. The first hour was creating pretty much everything but the delete and back buttons, and then the second hour (a day or two later) was spent implementing the back and delete buttons, and submitting to the app store.

I hope some folks like it. I spent a few hours playing fez with it in my hand. It sure beats trying to do the translations in my head (with nothing but an image to reference in my photos application).

Here’s an interesting quote from Masters of Doom, by David Kushner:

…Plato said, “Every man and woman should play the noblest games and be of another mind from what they are at present.” In the fifties, the anthropologist Johan Huizinga wrote that “play…is a significant function…which transcends the immediate needs of life and imparts meaning to the action. All play means something.” He suggested a new name for the human species: “Homo Ludens,” Man the Player. Marshall McLuhan wrote in the sixties that “a society without games is one sunk in the zombie trance of the automaton…Games are popular art, collective, social reactions to the main drive or actions of any culture…The games of a people reveal a great deal about them…[They] are a sort of artificial paradise like Disneyland or some Utopian vision by which we interpret and complete the meaning of our daily lives.”

I didn’t want to lose track of this.

I responded to a mobile twin cities thread about developing for iPhone without owning a Mac with the assertion that you still needed a mac to submit to the app store with either Unity or the Unreal Development Kit. It bugged me that I hadn’t verified the information, so a couple of quick google searches later, and I confirmed that I had been correct. Both the unity submission process and submission process for the UDK require an apple machine at some point for code signing.