My game ideas from the first week in July:

7/1 – A sort of turret game where you control the angle, thrust, and explosion intensity of fireworks. Your goal is to line the trails up with stars in the sky above. Maybe this is in VR and you have to also line up your gaze at the right angle too.

7/2 – Had the revelation that it might be worth prototyping the playground games I’ve worked on in the Vive. My original journal entry for the playground games were written back in November 2014, so I’ve been thinking about these for a long time. This idea could use another entry (or two), since there are at least a few different games that could be evaluated whether they would “work” in the Vive, and how.

7/3 – A game you play with keys and locks. Maybe this is a match-2 game. The twist is that there is only one match on the board for each other tile. So it’s actually a lot like the match trivia games I made for Moai, with a sort of fantasy skin. Maybe there are also chests or safes, and any lock next to it is assumed to go with it. Once all the locks are open, the save opens and gives you a powerup, or maybe just another key that you need to proceed.

7/4 – You know how you can play “giant monopoly” at a bunch of different board game conventions? A lot of publishers have giant versions of their board games, and you can even buy some of them commercially. (Giant Jenga and giant connect-four are both playable at the recently opened Up Down arcade in Minneapolis). Anyway, this idea is basically just that you could play those giant versions in VR without having to have enough space for them. I was looking at my shelf of board games when I had this idea, and in particular imagining the game Spiel, (which is a pyramid of dice), and how fun it would be to walk around that game, and throw giant dice around.

7/5 – A VR relaxation/exercise game called Sway. The main game input mechanic is the name of the game. You progress “forward” by moving your weight from foot to foot, swaying back and forth. The game will also prompt you to look left right, up down, for neck stretches, and to swing your arms or spiral them, essentially doing upper body stretches. 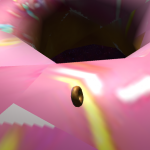 7/6 – As you can see to the right, I spent a bit of time this week (a few hours so far) prototyping a game from this entry. Some friends and fellow MN gamedevs recently conceived and built The Donutron, and I was basically lamenting the fact that there aren’t (yet) any games made for it specifically involving donuts. So this idea is just that you are a donut, rolling around a giant donut, collecting donuts. I’m soliciting feedback on a name for the game. Here are the possible names so far: Donutworld, The Little Donut, Space-Time Donut, It Came Frosting Space!, Planet Donut, Donut Moon, Space Case Donut Race, TorusTime, DonutFall, DonutGame, Donutroid, Donut Donut Donut!, Donut on Donut (on Donut?), Donut Eat Donut, Yo Donut, I heard you like Donuts!, Donut Moon. I’m leaning toward Donut on Donut, or Donut Eat Donut.

7/7 – A few different one-line game ideas yesterday: An open world board game (open in terms of you can do anything at any time). Game where your body is melting as the timer mechanic. Game where your feet are rats and you can’t really control where they go without cheese. Game where the world is a bicycle tire. Game where you are made of lava and melt / burn everything you touch. Game where you head is a book and you have to fill it with words.