Interested, as I am, in the family tree of puzzle games, when I wrote up my post about deconstructing Tetris, (the one where I go a bit into the mechanics of 1010! and Hex FRVR) I’d completely forgotten about this simple little iOS puzzle game from way back in 2009. Predating my own ActionChess by about two weeks in the app store, I remember playing a ton of this simple little puzzle game called Blop when I first discovered it.

The goals are slightly different from our line-making in Hex FRVR and 1010!; this square-grid game is actually more of a match-3 than a Tetris variant. The block shapes that appear are either 4-color squares or an angle made of 3 squares. And where color doesn’t matter in 1010! or Hex FRVR, here, the color is what’s used to remove pieces from the board. The board itself is 10×10, and each level the goal for number of matching colors increases. The first level, as soon as you connect 3 of the same color, they are removed from the board. After you’ve removed a square from each grid space (there is a handy “show” button to show you where you haven’t yet removed one), then the level increases, as does the number of squares you need of the same color. 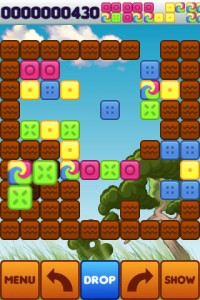 The gameplay is at your own pace, and you do see a queue of the next few pieces, so you can plan ahead to maximize your strategic brain burning. When picking up the game again after all this time, I found it didn’t quite hold my attention the same way 1010! and Hex FRVR have for so many hours. I’m not honestly sure why that is the case. The complexity is about the same, maybe a tiny bit higher, due to the color matching rather than line-making, but I found myself playing the game a lot slower than I do those others.

After being spoiled by the simple and pleasant UI from 1010! and Hex FRVR, I did have a couple of minor UI quibbles as well:
– The squares to be placed appear “hovering” on top of the gameboard. They can and do get in the way of any squares you have already placed underneath them.
– You move the pieces around with your finger, but cannot rotate them this way. Tapping on them does nothing. (There are buttons at the bottom of the screen for rotation, as well as one in the middle to drop the piece.)

I will say, the game has held up remarkably well. It functions just fine after all these years. Notably, it did see an update last back in May of 2013 that added (among other things) multitasking from iOS 4.

Update: It’s perhaps worth noting that I ran into Blop again while looking through my iOS purchases, and it was not the first time while doing so that I thought “hey, this game is actually very similar to this other game”, but I hadn’t recently written about either of those other games. For posterity, they were Unify and Claustrophobia. Zach Gage’s game, Unify, came out in September ’09. It felt to me (at the time, I distinctly remember) like a re-imagining of another early iOS game, that came out in December ’08, by David Leblond, Claustrophobia. I actually remember downloading and playing Unify when it came out, and thinking it was different enough to be its own thing, but that I liked Claustrophobia better. (I have actually written about Claustrophobia once before.)