Much of this week I felt pretty uninspired, and most of my ideas felt bland and pretty lame while I was brainstorming. (I forced myself to push through, but that won’t stop me from being apologetic about it.) Anyway, on 2/7 I spent at least ten or twenty minutes thinking about games to enhance or encourage creativity before realizing I was basically just re-creating improv games. Talking about improv games is probably worth a whole post, and I’m sure resources exist that describe and catalog them in detail, but the ones I played — while participating in Comedy Sportz in high school — were all “designed” very specifically to teach/reward creativity. I definitely believe that creativity can be enhanced with practice, hence this project.

2/5 – At some point I bought a giant tub of 1,000 square 1mm cubes in 10 different colors. They are great for paper prototyping. I spent some time on 2/5 playing with the cubes with my 5-year old daughter (mostly counting them). After she lost interest, I sketched out a quick game where you draw a number of them from a bag and play them onto a gameboard. In retrospect, it occurs to me this idea has a lot in common with my Action Go as board game idea from 1/1 and 1/2, but without tetrominos, and adding a couple of interesting mechanics. I will have to do some thinking about these together with an eye toward possibly integrating those new mechanics with the original idea. 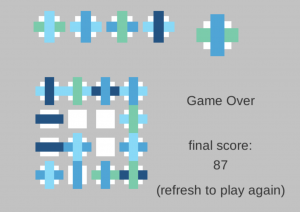 2/6 – I finally got my prototype of the game I started on 2/3 working. The project’s preliminary name is LineCombine. I was happy with how quickly this came together, but I’m still not as competent in Unity as I am in Xcode. You can see a screenshot of the game at this point. Anyway, as happy as I was to have it playable, I realized quickly that it was way too easy. And not really all that fun as a result. My brainstorm for the day was about ways to improve this. Now it’s the age-old question of how much more effort should I put into a prototype that is not yet(?) all that fun.

2/7 – An idea for a go variant played with only blocks of stone groups that already have two eyes.

2/8 – Card Battler game where each card is an upgradeable tank, and deploys to a battle zone each round.

Also: A musical puzzle game where each whole note is a “class” of unit, and there is some kind of paper-rock-scissors thing happening, like how water beats fire, and earth beats water, etc, only all 7 notes on a circle defeat one another, the next higher note defeating the one below it (so a C beats a B, etc.). Maybe this basically just turns into a musical identification game.

2/9 – A physical board game idea with big chunky components that need to be placed on pegs. You take turns placing pegs or game pieces. Many of the pieces need two pegs (in various different positions relative to one another), and I guess the big twist is that the board consists of a right angle, so pegs can be placed horizontally or vertically. This one will probably be hard to balance/tune without a physical prototype.

Second idea on the 9th was a platforming game where you play as the spikes. Maybe the player jumps automagically, and you have to move to catch him/it on its way down, or maybe you are a jumping spike, trying to impale moving people running out of your way.

2/10 – Spent some time thinking about a board game recommendation engine, specifically implemented in VR.

I also came up with some ideas for 3D visualizations in VR. Not really games, any of them. I’m hoping the upcoming VR revolution will include a “demoscene“. I think we saw some of that when the DK1 first came out, but I didn’t have one at that time, (yes, I’m kicking myself for not backing the kickstarter), so I was only aware of it peripherally. Once the hardware is commercially available, I’m hoping that kind of thing is available for download.