In some strange cosmic coincidence, both DropOut and Claustrophobia had updates released this evening into the app store. These are both incredible action puzzle games that I have spent lots of time with, and both are games that I’ve meant to write about here, and just hadn’t yet found time. Both games are also deceptively simple in concept, but lead to some really fun tetris-like brain burning when you’re in the middle of a good long game. So, in alphabetical order: 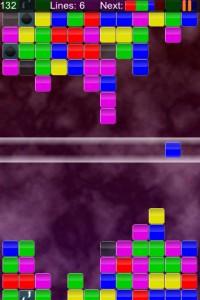 Claustrophobia, by David Leblond, is a collapse-like color/shape match-3 game (the shapes are new in this update). You’ve basically got a bar in the middle of the screen, and that’s where you’re releasing your blocks from. Blocks can either launch upwards or fall downwards, and if they hit or make a group of two or more of the same color/shape, then that group is removed from the game. If blocks are left without anything underneath them (or above them), they’ll fall, and in the case of the top gameplay area, they’ll fall all the way down to the bottom gameplay area, possibly scoring you big points, or possibly just mucking things up for you down there. The game’s namesake comes from the fact that both the top and bottom blocks are moving continually toward the middle, and when either of them reach it, that’s game over. There are special types of blocks that slow or speed up the block movement, and some of the strategy comes from knowing when to use or avoid them.

For a very, very brief period of time (two days, I think?) I had the high score on the “Normal” game mode of Claustrophobia. David took that score back from me shortly thereafter, although neither he nor I can come close to the scores getting submitted for “Easy” mode. Go figure. 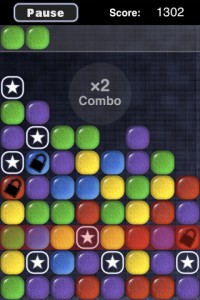 DropOut, by Curt Stein, also involves falling blocks, but you don’t control when they get released, they just fall all at once, as the row at the top of the screen fills up. If you have any column of blocks all the way to the top of the screen (thus blocking any part of that row from falling), then the game vibrates at you angrily a few times before game over. You can move the blocks that have already fallen either left or right, and they’ll wrap around the sides of the screen. Whenever a group of 4 or more blocks of the same color is made, those blocks are removed from the game scoring you points and making combos.

DropOut also has both bad and good special blocks, the good ones have stars on them and are basically just worth extra points (but they’ll fall off the bottom of the game if you let them get all the way down to the last row). There are also locked blocks, that prohibit the movement of their entire row. This is where the strategy comes in, and the game transcends a simple one-dimensional Yoshi’s Cookie clone. DropOut can get really intense after you’ve played for even just a few minutes, and I found myself getting done with a game and realizing I’d just been playing one game after another for over an hour.

For about a week after the game’s release, I also had the global high score for DropOut.

Both of these games are super fun, and well worth picking up. I’ve actually emailed back and forth with both developers, and they have been super approachable, and given me the advice I’d been asking for in regards to my own iPhone development. I’m excited to play with the updates and see what’s been changed. Highly, highly recommended.