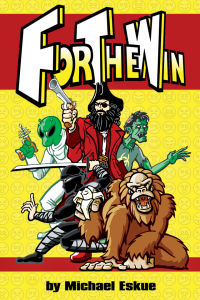 So I mentioned in a previous post that the For The Win app I worked on for Tasty Minstrel Games was removed from the app store, (embarrassingly right before I spoke about it at GDC). When I emailed Michael at TMG, he revealed that it was just not making enough money to justify paying the $99 to apple to keep it there, and he was happy to let me put it back in the app store under my own account.

So I spent some time last Friday and updated it for iOS 7, fixing a few minor cosmetic bugs here and there, finally submitting it around the end of the day.

Long story short, Apple rejected the app, for the following reason: “11.1: Apps that unlock or enable additional features or functionality with mechanisms other than the App Store will be rejected” They clarified with the following statement: “We found your app inappropriately unlocks or enables additional functionality with mechanisms other than the App Store, which is not in compliance with the App Store Review Guidelines. Specifically, your app allows users to unlock avatars by subscribing to a newsletter, following on Twitter, or liking on Facebook.”

Okaaaay… So a couple of reactions: 1. Obviously, this functionality was approved in the original app. But maybe they just didn’t catch it then. And 2. Doesn’t like every 3rd game in the app store do this? I mean, seriously, I see games giving extra currency for FB likes or even just twitter comments ALL THE TIME. Doesn’t candy crush unlock each level pack with Facebook interactions? (Although now that I think about it, those interactions take their friends back into the app, which is maybe how they get around this issue.)

Alright, so my arguments probably amount to “But everybody else does it!” I’ll be making some changes to just give everyone the avatars all the time (and probably re-word the achievements) and upload a new binary… probably sometime later today.

Oh, and by the way, since the app was in the store for about a year, and presumably some people paid for it in that time, I’m just going to put it up again for free. So the folks who downloaded it before can get it again without having to pay. I am considering adding the following functionality in an update: making it Universal, and asynchronous multiplayer. If and when I do that, I’ll probably shout about it some, and then make it paid again.