Since I posted last year’s GDC badge, I figured I’d do it again. Be sure to scroll down for some of my thoughts about the conference this year, as well as being a speaker for the first time. 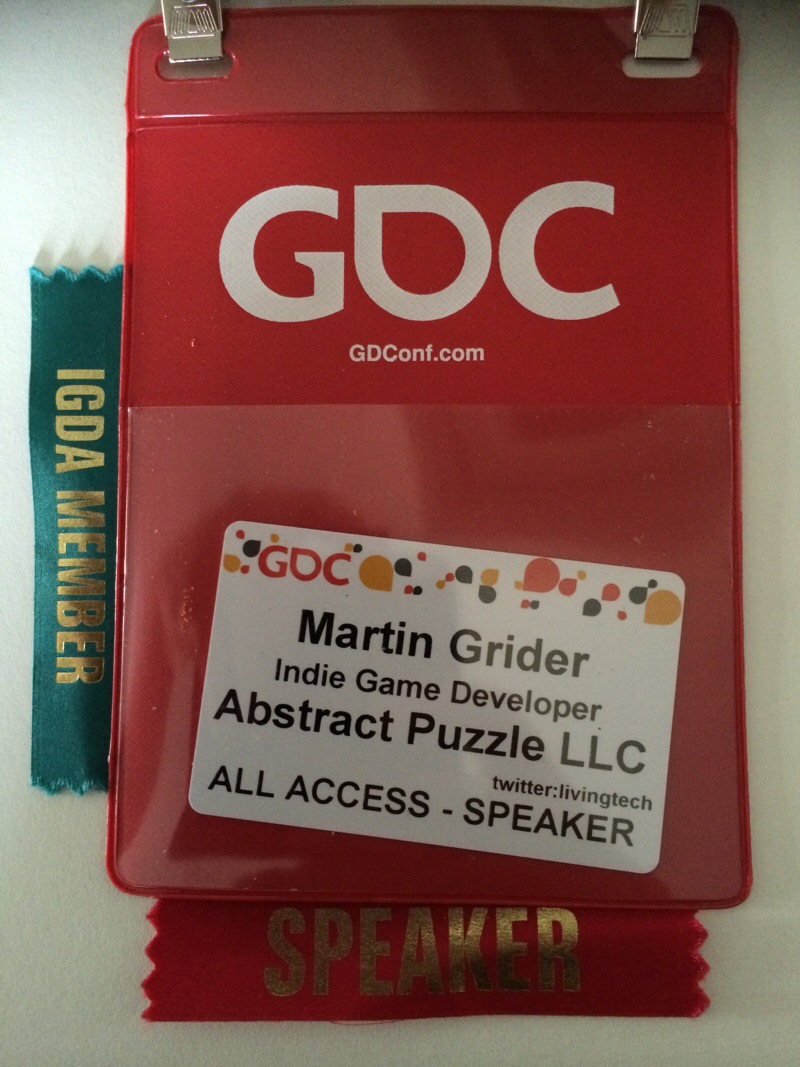 Being a speaker at GDC was definitely a double-edged sword. All bets are off if I get any consulting work out of it, but if you break down how long I spent preparing for my talk, I definitely invested more of my time than the cost of GDC admission. On the other hand, there were certainly less tangible benefits as well. I got to go to the speaker party, for instance, which was really only “valuable” in terms of meeting other speakers and making some industry contacts. I spent quite a while there talking to Chris DeLeon, for example, who runs Hobby Game Dev. (I finally decided to check out his site, and got completely sucked in, btw. Be careful, there’s so much content over there you can easily lose an afternoon!)

A bit about the process of being accepted as a speaker: When my talk was provisionally accepted, the organizers made some suggestions for directions they’d like to see the talk evolve, and made it clear that my acceptance was contingent on those changes. I (of course) had the opportunity to bow out at that point, but chose to work with them and make it the talk they wanted rather than the talk that I’d submitted. I would definitely like to be a speaker again if I have opportunity to present something I’m very passionate about, but that revision process is not something I think I’d like to participate in again, not because it was unpleasant in any way, simply because it really sapped my enthusiasm for speaking. In this case specifically, my talk was initially not so much about usability, and while I think usability is definitely an important aspect of game development, it’s not a topic that I’m super passionate about. If I speak again, I want it to be something I can get fired up about. (Certainly mobile board games are a topic that fits that qualification, but specifically because that aspect of the talk was deemphasized, my enthusiasm also suffered.)

GDC, for me, has always been about soaking in as much of the panels and content as possible. Performance anxiety really put a damper on that goal (certainly on the day of my talk, but it had ripple effects the day before and after) so that definitely felt like another downside. On the other hand the added prestige associated with the speaker ribbon was a definite plus, especially in terms of talking to and meeting people I would not have otherwise.

The other big difference this year was that I attended GDC from the perspective of an igdatc organizer. I went to various meetings and talked to quite a few other chapter organizers from around the world. My take-away from this is that we are doing just the right amount of stuff, I think. There are definitely chapters WAY ahead of us in terms of volunteer effort and event planning, but there are also chapters that put in way more effort and have less events and fewer attendees. Our new Multiplayer Extravaganza series is humming along, and many of us are super excited to create our own local multiplayer games to showcase there.

Finally, the other thing that felt different about this year’s GDC was that there was a lot more opportunity to PLAY there. In addition to the IGF booth (that has existed on the show floor for years AFAIK), as well as the “doing it on the table” (boardgames exhibit that I believe was new as of last year), and GDC Play (which is a paid exhibitor space where you can show off your game), there was also: the Mild Rumpus, Indie Megabooth, alt.ctrl.gdc, and a Killer Queen arcade cabinet randomly positioned near the expo hall entrance. All these were welcome additions, and made for relaxing interludes that definitely helped with that speaker anxiety I previously mentioned.

I feel like this entire week has been “coming down” from GDC. (Which probably explains my high-frequency blog postings.) I definitely feel more energized about game development after this year’s GDC than I felt after last year’s. I don’t think industry events like GDC are required to be a game developer, but if you are developing a game, attending GDC will feel like a giant room full of 24,000 people with whom you already have something in common.