Primitives is a relatively simple game where you place a card or one of your makers, or otherwise manipulate the gameboard. (I believe the last rules I playtested said you could do one of those per turn.) Manipulating the board means you could change a single card without a marker already on it, either by moving, rotating, or flipping it. By claiming a card, you “lock” it into place, and subsequently receive points for its symbols (and any matching symbols on adjacent cards) at the end of the game. The point values are dictated by the symbols on the center of the cards, either plus (+1 point) or minus (-1 point). Each card is double-sided, so flipping a card means it will change that symbol from + to -, or vice versa. The game ends when everyone has placed all their markers and all the cards are out on the board. More playtesting is probably needed, but I may need a rule that says something like: “If only one player has markers remaining, they MUST place it on their turn, and if everyone has placed their markers, the only available action is to place a card onto the gameboard.”

The first version was played with standard playing cards in a hex-like configuration. But I realized I could get more symbol matching in there (and more rotation) if I switched to hexes for the cards themselves. I also went from six symbols to three, for essentially the same reason. Here are some photos of various paper prototypes. 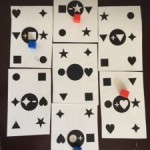 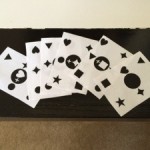 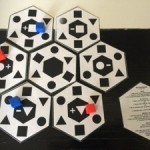 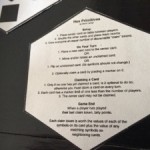 These games were inspired by my playing Love Letter for the first time, and wanting to design a game that used a similarly ridiculously small number of components. (Love letter is played with a deck of 16 cards. Primitives is played with only 7.) I may try and bring this game to a Game Designer Sessions meetup tonight or in the future.