A ridiculous number of news sources are reporting that EA and Blue Planet Software held a press conference a couple of days ago announcing that Tetris has reached the 100,000,000 paid downloads mark. EA’s iPhone Tetris has a near-permanent place on the app store’s list of “Top Grossing” apps, so it didn’t surprise me to hear that the iPhone port is doing well, but Tetris is apparently also available for 64 thousand other models of mobile device. I didn’t even know there were that many mobile devices out there! 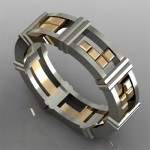 Here’s the official press release over at Tetris.com, where they are also featuring (advertising) the iPhone app, as well as Tetris Gems — a site where you can buy officially licensed Tetris jewelry of all things. (I would definitely wear one of these rings, but I’m not entirely sure it’s worth the $329.00 asking price.)

While poking through Tetris related news articles, I read a wired article from last year about some study that found playing Tetris improves your brain. And tangentially related is a very fascinating article I read even earlier this evening by Garry Kasparov titled The Chess Master and the Computer. It’s mostly about the state of computer chess AI, but more interestingly how those programs are having an effect on human players.

Finally, did you know there is a Church of Tetris!? Neither did I.