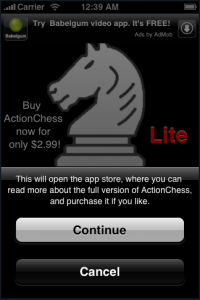 I spent some time yesterday… and again some time today… getting ActionChess Lite all ready to go. I decided on allowing three game types, 3-minute Timed Mode, Specific Piece Mode: The Whole Set, and Specific Piece Mode: Bishops. I went back and forth about that last one. I thought about choosing Queens, but feel like it’s too easy. Thought about Pawns, but that’s too hard. Bishops is a nice compromise, I guess.

I also gave away a bunch of promo codes for the game today on Touch Arcade. I hope that got it some much needed eyeballs, and I also hope it wasn’t premature. The impending 0.1.1 release should fix a whole bunch of bugs, and generally performs much better than 0.1 did. (I hope that gets approved soon.) If it’s not approved by Wednesday, I’ll probably send an email. It’s been a week and a day already, although I suppose technically I re-submitted the binary a week ago today. I don’t know what that does for the app submission “queue”.

The other big thing that took the most time about the Lite version is that I decided to incorporate AdMob ads into the menu screen. They’re at the top of the screen, where you don’t click anyway, and as soon as the app is released, I’m going to switch it to display (as much as possible) only the link exchange ads. This means it’ll just show ads for other games that show ads. And then those games will show ads for ActionChess Lite… hopefully exposing more people to ActionChess who might not otherwise have seen it. It’s all about the evangelism here, not about making money. (I’ve seen the statistics on how many views you have to get to make money on iPhone ads, and it just doesn’t seem worth it at this point.) Anyway, hopefully the ads won’t detract from anyone’s enjoyment of the game.

There’s also a handy button to purchase the full game from the App store. The button doesn’t take you there before asking if you’re sure though. I don’t want anyone getting pissed off about that. Obviously, the screenshot shows that dialog in action.