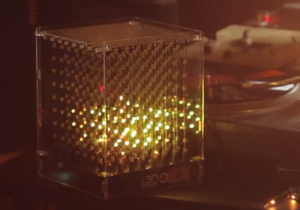 If you haven’t already seen the L3D kicksterter, head on over there and check it out. As of this writing, there are still 13 days left to get one of these awesome LED cubes.

I’m excited to announce that I’m working on some games for the L3D. As of last night, I’ve got a project with 4 game controllers working with the L3D “simulator”. You can see one controller working with my sample project here:

I’ll be posting the code in the next week or so, after I get my cube in the mail and test on some actual hardware. The L3D library (including primitive simulator shown in the video above) is all written as a plugin for Processing, (which, incidentally, I’ve wanted to work in for AGES), so it was a relatively simple matter to get the L3D plugin working with the Game Control Plus plugin.

Now that I’ve got them working together, I’m planning on working on the following projects:

I’m also really interested in the possibility of designing some turn-based “board games” using the L3D. I haven’t written anything down yet, but there are some ideas percolating in the back of my head.