Today Hearthstone is finally available worldwide, and I will definitely be spending some time with it on my iPad. I have played it a bit on my desktop, enough to get the feel of it, and decide I wanted to wait until it was available for iPad. (Mostly because that’s where I spend most of my time gaming.)

I’m not really interested in commenting on the F2P mechanics, (since enough has been made elsewhere of how “gentle” they are in Hearthstone, or how “right” Blizzard is getting it), I’m more interested in a study of the game mechanics independent of the monetization strategies (no matter how closely they may be coupled). From what I saw at GDC, Blizzard really spent a lot of time trying to make Hearthstone accessible to the masses. This manifest in a lot of different ways, but essentially they are balancing card abilities and deck compositions (for pre-built decks you encounter and use early in the game) to help new players.

I never really got into Magic the Gathering. I know there will be some of you that stop reading at this point, but I guess what turns me off about it (and, realizing this, the entire genre of deck-based-fighting-games) is the direct conflict. Most of the card abilities deal with combat. Dealing damage to your opponent is a (if not THE) central mechanic, and I guess I just find that emphatically boring.

A month or two ago, I did get pretty into Card Wars, a LLG (CCG?) inspired by an episode of Adventure Time. It was a great episode, and made everyone who saw it (well, everyone I’ve talked to) want to play the game. It’s a lane-based game like Solforge, Spectromancer (or it’s sort of predecessor Kard Combat), or Kongregate’s more recent Tyrant Unleashed.

The first Hearthstone talk I saw at GDC (I saw two) was one about the AI, and I was pretty much entranced by it, loving this slide of the overall architecture: 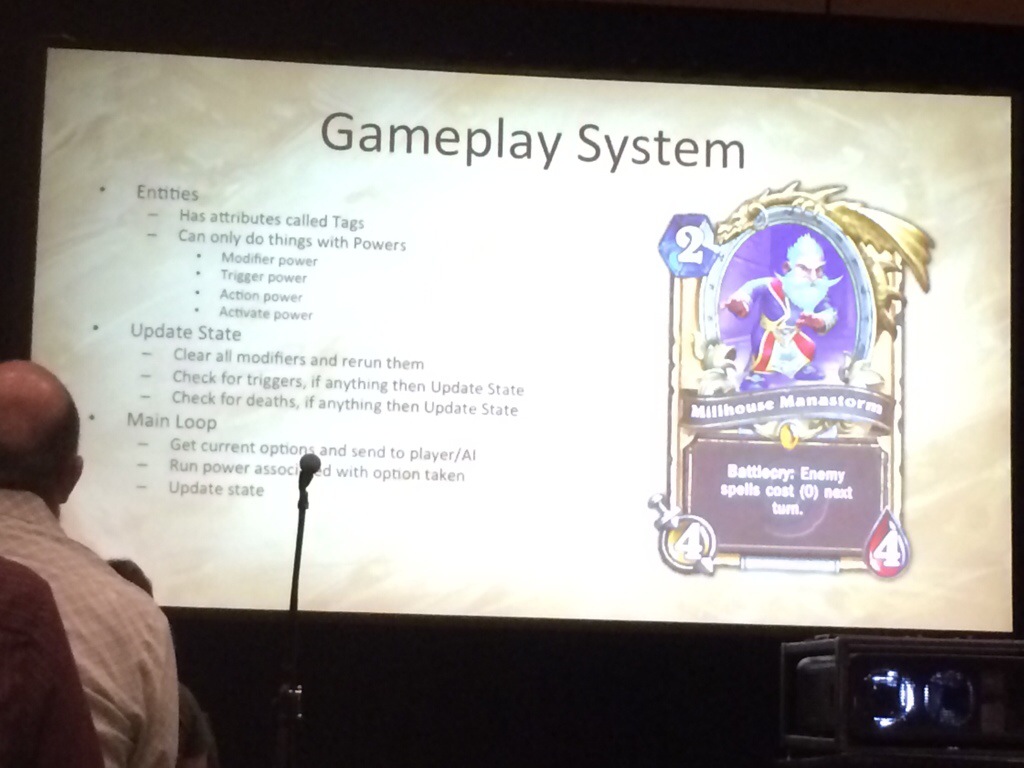 I guess this is another one of those posts where, if I had infinite time, I would dissect the mechanics I like about each of these games, and draw a cool diagram or something, but I don’t have the time, and I’m going to go download Hearthstone now, before I forget.