tl/dr: I just submitted an app version of a board game I call Root Down to the app store. The app will be free, and represents not all that much effort on my part, but if there is interest, I’d like to update it with AI and multiplayer.

Root Down is a 2-player abstract strategy game where the main mechanic is that pieces flip from a state where they can move (kickers) to a state where they cannot move (roots) after every move. The key is that kickers must also be next to a root in order to move, and the number of spaces they move is also determined by the number of kickers next to each root. I spent an evening and adapted the game for iPad, and have now iterated on it a couple of times to the point where I think I’d like to get it out there and see if there is additional interest. There is no AI, and the game can only be played on an iPad with two players. Consequently, I can’t imagine it will get that much interest, but I still want to put it out there and see what happens.

Here are a couple of screenshots: 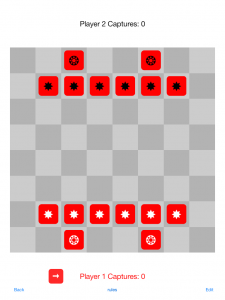 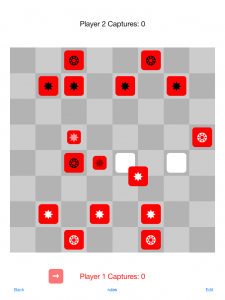 (Yes, I know this looks awful! I have lost any html skills I maybe once had!)

The full rules for the game can be found in this public google doc.

I could probably wrote an entire additional blog post about what features I decided to include and ultimately decided against including in this simple game. As I mention below, I essentially wrote the initial version of this app in an evening. Probably four hours tops. I knew I wanted to put it out there, get it in the app store, even though it’s pretty minimal in what it does. That initial version basically just had the following:

Yes, that was it. I spent another couple of hours adding the following:

Apple rejected the first version because they didn’t like this bit in my app description: “This is an app experiment. There is no AI (yet), nor are there the other typical bells and whistles usually present in iOS board game conversions. If there is interest, I plan to add an interactive tutorial, asynchronous multiplayer, an AI to play against, universal (iPhone) support, and whatever other features are requested.” I removed all of that, and replaced it with a call to use a “submit feedback” button on the app’s menu.

Subsequently, (this morning), I found a bug in the end-game scoring. I’ll be rejecting the binary, and resubmitting in the next hour or so.

A month or so ago, Christian Freeling (creator of Mindsports) started a contest on BGG in the Abstract Strategy forums concerning “activator” games, or games with pieces that “activate” other pieces. The idea percolated in my brain a bit, and suddenly I found myself on the floor with my copy of Card Chess, playtesting an idea or two.

I got enamored enough with the game that I wrote up the rules, and wanted to post them on BGG to get feedback, but I didn’t have a name. I started thinking about the pieces in my game that activate, and how they sort of put out tentacles to the pieces next to them, kind of like roots on a tree. Eventually the Beastie Boys’ Root Down popped into my head, and the name was set. Eventually I re-wrote the rules to incorporate “roots” and “kickers”, and “kicking it root down” from the lyrics of that song. I think it works pretty well, actually, for an otherwise themeless abstract. Eventually, I did post the game to BGG. I have also submitted the game to the actual BGG database, where it is pending approval.