How clever is too clever? If a puzzle exists in the forest, but nobody is around to solve it, is it still interesting? (Translation: If you make a puzzle, but tell nobody that it exists to be solved, will anybody ever solve it? …probably not likely.) 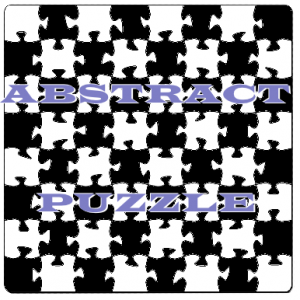 I like my puzzles with well defined rules. I tend to get frustrated with really open-ended puzzles. (One of the reasons I never really got into crosswords, that and my brain is rubbish for trivia.) That makes the following admission all the more worthy of admonishment. Essentially, I was chatting with the designer for Oppo-Citrus yesterday, and it became clear that he hadn’t understood the logo I created for Abstract Puzzle (that’s it on the right). Now, I know the logo is rather amateurish in terms of graphic design, but I mentioned that I liked the idea behind it if not the execution. That’s when I got the blank stare. I had to explain to him that it’s meant to be a chess board made out of puzzle pieces. It’s a hybrid of puzzles and games. It’s a puzzle game. That hadn’t been clear to him, which of course had me questioning whether it was clear to anyone.

Now I actually think that one is okay. It’s just a logo. Its importance is in recognizability, not necessarily understandability. And I think it looks fairly unique. (Though, again, I’m thinking of it more as a first-draft than the final representation of my business.) It’s not what prompted me to write this post.

What prompted me to write the post was realizing that the name of the business actually suffers from the same issue. Only, I think there’s even less chance people are going to understand the name. So that’s why I’m writing this. To explain it. To give it away. So… um, spoiler alert. I guess. If you consider a puzzle nobody actually knows is a puzzle to be spoilable.

So there you have it: Why I chose the name that I did for my new business.

1 thought on “Abstract Puzzle, the name, the logo”