The idea of Tetris as a physical board game is not a new idea. (I have a small collection of them.) While visiting Kotaku tonight, I found an intriguing post about two new Tetris board games showcased at the Toy Fair 2011 in New York City.

First I’ll mention Tetris Link, a stand-up version of Tetris for up to four players. The gameplay here is not about breaking lines. You get one color, (and presumably all the shapes), and you try and connect up your pieces while preventing your opponents from doing the same. I’m not exactly blown away by the originality here, although I suppose none of the other Tetris board games have been all that ground breaking either, but at least this could have had a hint of strategy in it, if they hadn’t introduced a die that you use to determine which piece you get to drop. I mean, sure, I’d buy it just for the die with Tetris shapes on it, but do I want to play a game with that mechanic in it? Not really. Fortunately, I’m sure it won’t be too hard to make up some slightly more thought-provoking rules about when you get to drop what pieces.

Tetris Link won’t be hitting stores until sometime later this year, and it sounds like it’ll be exclusive to B&N before it hits shelves everywhere. I don’t know if I’ll even remember to look for it at B&N, so it could be quite a while before I get this one. Also, I pilfered the photo above from Tetris Link’s facebook page, where it looks like they had some giant Tetris pieces to play with, as illustrated by these Tetris booth babes. (There were a lot more photos like that one on Facebook. Shameless, or fun? You decide.) You can also register to win a copy from the Facebook page (at least for the next day or two). 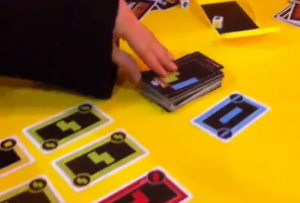 This is the one I feel is a MUST HAVE (although, lets be honest here, I’m obviously a collector, and I’ll be getting them both). The game, which may or may not be called simply “Tetris the Card Game“, is apparently getting made by Fundex, the same folks who made five billion versions of Phase 10. Apologies for the bad video still, but I simply wasn’t able to find out much of anything about this game! I can’t wait to get my hands on a copy, and the video says they’re available now!!! Chances are that it’ll be in Target (based on the Phase 10 connection) and all over the place, but I’ll be damned if I can find it anywhere online tonight. When I get access to some actual product information, I’ll have to post it here (as well as at boardgamegeek, which is still unaware this product exists). This is appealing to me for a lot of reasons, but mainly because it looks kind of like a multiplayer puzzle mode for Tetris.

In my scouring the internet for the above card game, I eventually remembered to try the official Tetris site, where I’d forgotten they do occasionally post some pretty interesting Tetris related news items. Some quick links to things I missed in the last year or so since I’d been on there:

Visit the Kotaku post for videos of both of the new board/card games in action.