Game Center games are starting to pour in, and today I stumbled onto the (true**) first Match-3 game I’d seen, (although I don’t think it was the first one on there), called GeoBlocks. I’m going to talk about that, and then I’ll also talk about the second match-3 game I played with Game Center integration, Squaree, and I will actually go so far as to say that Squaree is my new favorite Match-3 game! As of this writing, both GeoBlocks and Squaree are FREE in the app store, so get ’em while they’re hot. 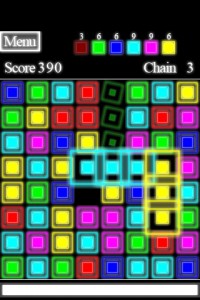 I played GeoBlocks for quite a while, trying to get the next achievement. It’s a pretty standard match-3, with level progression based on the number of matches you’ve gotten in all the colors. In fact, that’s one of the only really interesting aspects of the game… to score really big, you actually want to try NOT to progress, so you can rack up points before the timer (white line at the bottom of the screen) gets going so fast that you don’t have time to think before you match.

I made a note to myself to add GeoBlocks to my spreadsheet listing Match-3 games for the iPhone, and I actually went one step further than that, and added a column indicating whether the game has Game Center integration. I suppose now that I’ve done that, I should really add another column for OpenFeint. Maybe I’ll do that some other time and actually go through all the games listed to see which have which features.

So then I went looking to see if there were other Match-3 games with Game Center, and I found Jewel Craft in the featured list. I wasn’t about to shell out $3 for another Match-3 game though, (especially when I just played a perfectly decent one for free). That got me thinking about what other free Game Center games there might be out there, so I searched App Shopper for “game center”, and sorted by price. That was when I found Squaree. 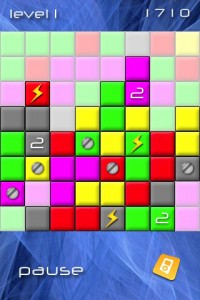 Squaree doesn’t really look like much, and (as is common when I go app shopping) at first I didn’t even play it, just downloaded it to check out later. But I soon grew tired of scanning through all the crap in that AppShopper search, and Squaree was either the first or second app I opened up to check out.

It’s match-3, definitely, but the way you get your squares is pretty unique. There is a board with a whole bunch of grayed out pieces. Tapping a piece causes un-gray, and for it to fall all the way to the bottom of the board (or until it hits another solid piece). Get three of the same color to match, and two of them disappear, but the third turns into a “locked” piece. Match four pieces and you get a X2 piece remaining, and if you match 5, you get a piece that, when matched, removes all solid pieces of that color from the gameboard.

This is pretty much all you need to know to get started playing Squaree. It’s simple, yes, but I had a lot of fun with it, and I’ll definitely be playing more of it in the next few days. There are two game modes, but only the “Challenge” mode has a high score list. That list is extremely short right now, and I’m hoping to make it to the top with some practice in the next few days. My only disappointment was finding out that there aren’t any Achievements. I wish I could add yet to the end of that statement. :)

**Note that both Azkend and Dice Match had Game Center the day after its launch. They are both solidly in the Match-3 category, but neither has the swap-to-remove mechanic. Both are the kind where the matches already exist and you have to choose which one to remove. (Think Same Game rather than Bejeweled, but you have to touch all the pieces you want to remove.) It would be interesting to write another post comparing and contrasting those two games, but I’m pretty much done for the evening.