Today marks the re-launch of Chesstris.com. I had a bit of a revelation in the car the other day, and realized that both the video games I’ve designed and actually completed are hybrid video games mashed-up with board games. This is a mixture that I wholeheartedly endorse and enjoy, and it’s one that I realized that the name “Chesstris” could also be imagined to embody. Anyway, it’s what I will now endeavor to spend more time examining here.

Chesstris, where board games and video games collide.

To kick off this new era for the site, I thought I’d start with a review of one of the most worthy board games I’ve seen converted to a video game for the iPhone, Carcassonne. 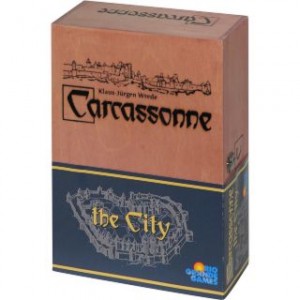 Sure, the Carcassonne app, for iOS has only been around since the beginning of June, but we’ve actually been playing Carcassonne the board game for years in my house. Literally, I’ve been playing Carcassonne longer than I’ve known my wife Florence, which, while it hasn’t actually been that long, feels like pretty much forever. (Not in a bad way, I swear!) I have a bunch of the expansions, and I keep them all together in the special edition wooden box that came with Carcassonne, The City. (The City is actually a stand-alone game, with pieces that are incompatible with the original game. This is the number one reason it is relegated to the closet while we keep the standard game and all its compatible expansions in the living room with the “often played” games.) Anyway, I bought Carcassonne for the iPhone as soon as I heard it was out, and straight away convinced Florence and our friend Angela to play a game with me on the iPad. 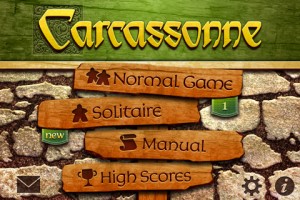 Right away I was pretty impressed about how the game didn’t look pixel doubled on the iPad in 2X mode. I was also impressed by what I didn’t experience — frustration with the UI. The User Experience on Carcassonne is pretty darn close to perfect. When you sit down to start listing out the features of this great app, you actually start to get a little overwhelmed with how great it is. It’s no wonder it took a year to make, really. (Incidentally, if you’re a fan of the game, that podcast is well worth a listen, especially if you’re an iOS developer.)
1) They implemented pretty much every kind of multiplayer possible. Pass-and-play on the same device, multi-device on Wifi or bluetooth local networks, internet play with no time limit, and internet play with 60 seconds per turn. There is an invitation system for playing against friends who also have the app, or you can play against random opponents.
2) They built in 6 or 8 different kinds of AI (I forget which), for playing local games on the device.
3) You have a persistent ELO stored, both on your device for local/solo games, and another two — one on the server against friends, and another for playing against those random opponents. Keep in mind, AFAIK, there was no concept of ELO for Carcassonne before this app. (Not to say it didn’t exist, but I didn’t know about it.)
4) Push notifications let you know when it’s your turn to play. This has since become a feature requirement if I make a turn-based iPhone app in the future.
5) This feature, while it may not sound like much, is one of those little details that makes a game feel incredibly highly polished. They could easily have left this out, but I feel certain this was one of those features that someone really felt they had to get in there, and it really adds a lot, in my opinion: On the screen that lists your in-progress games, there is a thumbnail representing the shape of the tiles for that game. This basically “personalizes” each game, and makes the list of games you’re playing feel that much more unique.
6) Can’t forget, there is an entirely new game mode invented for the iPhone app that allows you to play solo against the game, while simultaneously giving you a score at the end that you can compare to everyone else’s score for that particular solo game. (There is one unique set of tiles released each week, or you can play a random set.) 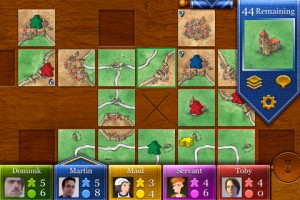 I’m sure there are more features I’m forgetting, but it’s worth mentioning that the game play screen itself is just an amazing piece of touch-based software engineering. It’s got all the standard pinch-and-zoom stuff, and for all the information it’s cramming onto the screen, doesn’t feel cluttered or busy at all.

Overall, I have gotten so much more than $5 worth of pleasure out of this app that it’s not even funny. I play Carcassonne on my iPhone as much as, and sometimes more than, I use the Mail app (which I do daily, btw). Carcassonne is not really a hybrid board game / video game, but it’s such a great conversion of one to the other that it’s definitely worth reviewing here. We really enjoy it a lot, and hope you do too!