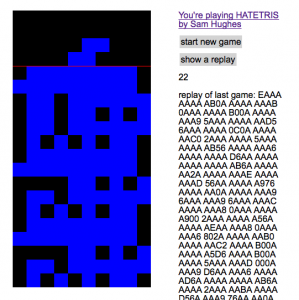 Hatetris is a Tetris variant that chooses the worst piece possible and makes you play it. (Via jttiki, but ultimately via BoingBoing.)

I have a lot of respect for the author, Sam Hughes, as he claims he wrote Hatetris in JavaScript because he feared and/or despised it. I also despise JavaScript, but not so much that I want to write Tetris in it. (And anyways, I already wrote Tetris in ActionScript, which sucks as bad or worse than JavaScript. Hughes’ code is much prettier than mine, I looked.)

Philosophical statements aside, Hateris actually succeeds as a game for several reasons. One is that, because the game is not random, getting even one more line than on a previous attempt requires you to try a different tactic, or approach the game with a different strategy. It’s clear that Hughes knows he’s onto something there, because he’s implemented the ability to replay previous games. It’s quite fascinating to watch the current record (22 lines), and analyze the tactics used.

Following various comment threads on Hatetris, I also discovered that there was previously a similar variant called Bastet (bastard tetris–desktop only), and also that there is not just one, but two playable versions of Randall Munroe’s vision of hell.

Update: One of the playable versions of hell links was broken, so it was removed on May 5th, 2017. Thanks to a reader for pointing that out!