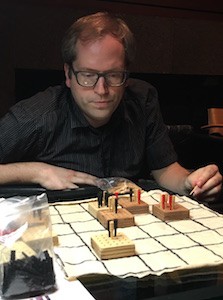 This week I managed to spend some time playtesting the board game idea I’d come up with (and been rather cagy about) from 3/28 and 3/30. (Pictured here is Patrick Leder playing it at GlitchCon, the twin cities only actual game development conference.) The weekend before, I spent a rather significant chunk of time in my friend Lloyd’s garage, creating what you see in the photo. There are 6 pieces per player, each with 25 holes in them the right size for cribbage pegs. I won’t post all the rules right now (maybe sometime soon), but essentially each peg represents a potential move that piece can make. This week I spent at least one day’s brainstorm thinking of names for the game, and finally came up with one that I think will stick: Eigenstate.

4/22 – Came up with a game idea to be played with pipe cleaners. At first it was hard to come up with something not inspired by pickup sticks, but what I really wanted was a game where you would have to bend the pipe cleaners in strategic ways. I’m not sure what I ended up with got to a place where it would be fun, but I like the idea of pipe cleaners as game components, and might try to brainstorm another one sometime.

4/23 – Another “what if you were X in VR?” idea. This time butterflies. I like the idea of having to flap your wings to get around, and butterflies have such a specific fluttering motion, what if the world were slowed down so that you could flap leisurely, and everything was at butterfly scale? Could be a really beautiful game about gathering nectar from flowers.

4/24 – I started with the premise of an idle game in VR. I like this idea quite a bit. I think you need some core game mechanic that isn’t just watching numbers and buying upgrades though. Something fun to do, but maybe only for a few minutes at a time. Then the game continues collecting whatever your various resource(s) while you are away, and when you return, you have a bunch of purchasing to do before returning to that mechanic with your improved stats. I actually think VR game session lengths may end up more like mobile than like hardcore/core game experiences, at least for the short term, partly because of the headache issues, but partly because when it’s room scale, you get tired out. 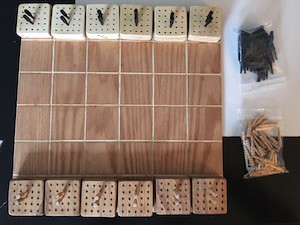 4/25 – So after making the prototype I mentioned above, I didn’t actually have a chance to play it with anyone right away. It sat on my counter for a while setup as shown in this picture. I spent more time thinking about it and as a result, had this thought: what if it’s actually more of a game system rather than a single game? Right away I came up with two new game ideas. The first is one where each piece starts with a specific number of pegs, say one in each direction, and when it moves that way the peg is removed. In this way, the piece can only move each direction once per game. There are captures, and the player who runs out of moves first loses the game. The second game is a sort of physical version of Galcon. Each player starts with a single piece full of 25 pegs in their color. There are empty (“neutral”) pieces scattered elsewhere around the edge of the board. You can move next to a piece and attack it. After removing an equal number of pegs from each (until one is empty), the player with pegs remaining can choose how many to transfer to the newly empty piece. At the start of your turn, you add a peg to every piece you have pegs in on the board.

4/26 – Two more Eigenstate game ideas, and the brainstorm that found the name. One of the games was a variant on the original game, (which I playtested already, and found lacking), and the other is a connection game, where each player again has a color of pegs to call their own. The game pieces are just segments of the gameboard that may be re-arranged instead of (or perhaps in addition to) adding a peg anywhere on the board. First to connect two sides of the board is the victor.

4/27 – I had a very vivid dream-like vision of a game played in room scale VR immediately after waking up. The game makes cubes out of the walls of the space you have available in room setup, and you never move out of those walls. The cubes are either connected or not connected to one another, and the disconnected ones form large shapes that are then “ejected” from the walls and fall onto the floor, or just float in the space around the player. The game is therefore just to put the pieces back into the walls. The game just had a really specific look to it, and the way the cubes congealed into solid wall or pieces was just really beautiful. I fear the gameplay is easily reproducible, (but questionably fun), while the visual effects are likely possible, but definitely out of my league without spending days trying to reproduce them.

4/28 – A racing game in VR, but using the locomotion mechanics from The Lab or Budget Cuts. To make it especially interesting, the landscape being raced across must be uneven and jagged, so there are obvious (or not so obvious) advantages to one route over another. Maybe there are also visual obstacles so you will have to move around in your space in order to have the best line of sight to the next teleport spot. I was picturing a rocky terrain originally, but now I’m thinking you could also do it in a maze where there are only small gaps, obviously too small to fit through, but no problem for someone with a teleporter.