It’s been a while since I’ve posted any Tetris stuff on here, and I ran into some interesting hardware implementations today that reminded me I hadn’t posted about L3D Tetris yet. So…

Last week at the bar after our monthly igdatc meeting, I was showing off the L3D, and took this vine of CubeTube user hape’s L3D Tetris. (Shortly thereafter, the official CubeTube youtube channel also posted a much better/longer video of it in action.)

Frankly, this existing was a load off, since I had already said I was going to write Tetris for the L3D. Now that I don’t have to, I’m focusing on some more original game designs. I should have one I’m calling Match-L3D playable later today. (Though I’ve been saying that for a few days, and I spent most of this morning cleaning up code I wrote last night when it was too late for me to have been realistically coding.)

My impression of actually playing it was basically that there are far more satisfying 3D tetris implementations, unfortunately. It’s just plain HARD, and can be really difficult to “line up” the pieces, especially the farther into the cube you’re looking. The L3D has a pretty serious problem with reflections off the plexiglass, and that didn’t really help with the playability either. 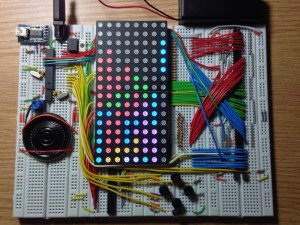 Over at the HackADay blog, they posted yesterday about user Alex’s Arduino Tetris on an LED Array. That one was pretty plain looking, (not to diminish Alex’s efforts, I’m sure he learned a lot putting the project together!) That post links to a previously posted project (shown above) called Breadboard Tetris, as well as another running on an oscilloscope. But their blog is actually a cornucopia of LED Tetris links! Many more are findable by searching their website, including Tetris wearables, like this LED tie, and a sweet looking arduino bracelet. 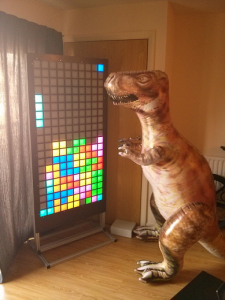 If you want to build your own LED Tetris, there is an instructable you can follow, (although comments imply it’s incomplete, so maybe you’ll have better luck with this other one). Anyway, hardware hacking is getting easier and easier all the time.

Many of these projects post their Tetris code, and it would be a fun exercise (though not one I’m about to undertake just now) analyziing how they all go about implementing the various challenges inherent in writing Tetris. (Piece rotation would probably be the most interesting to analyze, although 2D grid storage would also be worth comparing and contrasting.)

I’ll leave you with this custom LED Tetris project next to an inflatable dinosaur. It’s a tossup which one is a bigger waste of space. At least you can deflate the dino. ;)