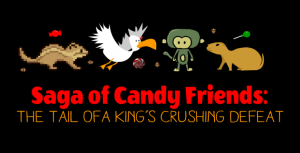 This year’s Global Game Jam is over, and from my perspective it was a raving success. I took part with the other IGDA Twin Cities folks, as part of a relatively large team focused on making a local multiplayer game using Xbox controllers. (Click the image to read more about the project I worked on.)

The weekend began on Friday night with everyone “pitching” at least one idea for a game in front of the group. As there were about 40 people there, this took quite a while. Then people started splintering off into groups. I went into this year’s Global Game Jam with several “agendas”. (Incidentally, I probably wouldn’t recommend this for beginners, but this was my third year taking part, and at least my sixth game jam, so I felt it was okay for me to have some goals.) Here is a list of those goals, in order of importance to me, and whether or not I felt they were achieved:

As I mentioned, Friday night was pretty “unfocused”, but I still felt like it was worth it, because I got to learn a lot about controller input in Unity, and thus, also a lot about Unity in general. I was also instrumental in setting up version control for the project on Friday night, but I’m not sure that was a “success” really. I’ll say more about that in a bit. When I left around 4 AM on Saturday morning, there were somewhere between three and five independent “ideas” getting floated around our group, but only one (Bird Drop) had anything appearing on the screen. When I showed up again on Saturday, Bird Drop was playable, and quite fun! I spent a few hours implementing the score display, as well as the system that triggered the game over screen and restarted the game after about 10 seconds or so. Eventually, I also worked on the over-arching menu system, as well as implementing sound effects.

In addition to my personal goals, here are some bullet points about “What went right” from our team’s perspective (although this is all still “in my opinion”, I’m not speaking for the team here or anything):

This would not be a true postmortem without some bullet points about what went wrong over the weekend:

Overall, it was a great weekend, and I had a blast. Thanks to everyone on my team, and to everyone who participated at our location!