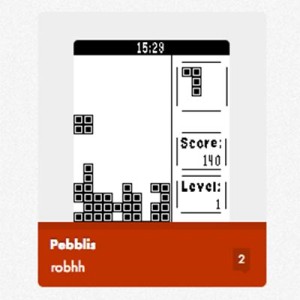 So I finally got with the program and figured out how to load up watch faces and 3rd party software onto my pebble today. (It turns out you just need to open relevant files in Safari, and they are already associated with the Pebble app, which then syncs them to the device for you.)

Anyway, this of course meant that I could try out Pebblis, a version of Tetris created for the Pebble by Robert Hesse. As widely reported, Pebblis is nothing more than a Tetris clone you can play on your wristwatch, but if you’re not looking for anything fancy, it’ll definitely scratch that tetromino itch.

I haven’t yet mentioned on this blog that I got into Google’s Glass Explorer program. In case you’re not familiar, google is giving 8,000 people the chance to get their hands on Google Glass early (you still have to pay for it). They held a big contest on twitter and Google+ to pick who gets it, and I got in with this tweet: “#ifihadglass I would use OpenCV to find grid patterns in what you are seeing. Then allow you to play Tetris on them, of course.”

Unfortunately, now that the Glass API has been released, it doesn’t sound like AR tetris is really possible, at least with this 1st-gen device. (In fact, the AR capabilities will be quite limited, and that rather disappointing aspect of the hardware has not gotten much press, at least that I’ve seen.) I’m still excited to get my eyes on mine, and I’ll be exploring what games appear for it over at Games with Glass, a site I’ve started with my former co-worker Breon. Not much up over there yet, but then again, there’s really not much yet to report on either. I’ll be writing more about all this soon, for sure.

UPDATE: After much deliberation, I decided not to put in for my Google Glass. I didn’t have time to make something for it, and it was hard to justify as a business expense if that was the case. Additionally, I tried them out, and had a sort of “what’s the big deal?” feeling about them. I’ll be curious to see how the next few years shapes up for that product line. I think they’re going to be leapfrogged by tech that is maybe not quite as technically revolutionary, but delivers a more compelling experience. (Perhaps even tech originating from google or even the Glass project.)