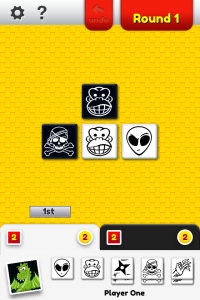 It’s called For The Win, (app store link), and it’s a tile-laying abstract strategy game for 2 to 4 players. Unfortunately, the app took a lot longer than I’d estimated, and we didn’t get to put asynchronous multiplayer in there, but if the app does well I’m really looking forward to adding that in an update. (I think it will be a really fun addition to all the other games I already play that way on a daily basis.)

The game is played by placing tiles from your pool of five different types (Alien, Monkey, Ninja, Pirate, Zombie — everyone has two of each) next to each other on the gameboard until someone has all five types of their color connected. The difficulty comes in that you can’t immediately place next to your existing tiles, and have to manipulate them into position by either moving them, or using each tile’s unique special ability. 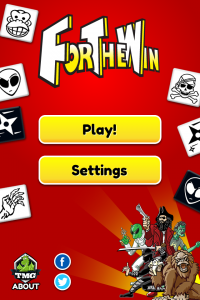 As you can see, the game really has a really great look and feel to it. The app was designed by Luis Francisco Baroni Coutinho, who has worked on art and graphic design for an absolutely ridiculous number of board games in the past. He took the game’s original character artwork (by Eric J. Carter), and designed basically everything else needed for the iPhone version.

The “client” for this project was Tasty Minstrel Games, and if there is one thing Michael Mindes did exceptionally well on this project, it was bring together a great team. The leader of that team was Brad Cummings, (of iOSBoardGames.com fame), and it has really been a pleasure to work with Brad, as he just really has his finger on the pulse of this weird little sub-niche that is iOS board games. He did all the early UX design for the app, as well as keep track of everyone’s tasks and all that other lovely stuff that a good project manager does. 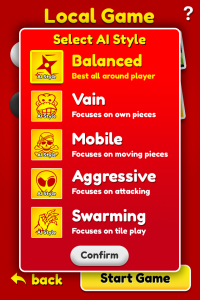 The app also features five different AI personality types, with three different difficulty settings for each. One of the biggest technical challenges (and most rewarding aspects) of the game’s development was working with AI programmer Tysen Streib, whose work was so good that most of the changes we had him make were to make it easier to win against the AI on easy difficulty.

I didn’t work closely with him, but it’s worth giving a shout-out (since it appears that’s what this post has become) to the game’s original designer, Michael Eskue. I actually backed the board game on Kickstarter way back before I had even an inkling that I would be working on this project. Coincidentally, I got my Kickstarter reward copy in the mail about the same time I got started on development. Anyway, the game has real hidden depth and strategy. It can be a difficult one to wrap your head around at first, (and that may be the biggest challenge to this app’s success) but I genuinely think it can be rewarding to learn and play.

I will post again when it hits the app store.