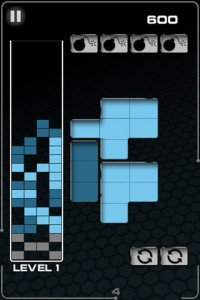 Hot on the heels of my Action Puzzle slide deck, I saw a post yesterday on TouchArcade about Fluxe, a new app that bills itself as Action Puzzle, so I checked it out, and I’ve got to say that it’s well worth playing. I won’t get too into the gameplay, since TA already did that, and honestly, reading about it didn’t do much for my understanding anyway. It’s definitely in the “like tetris” category, but it uses the line-clear mechanic rather than the pentominos. It’s only a 4-wide well/column that you’re filling, so none of the pieces are not more than 3 blocks either wide or tall.

As you can see from the screenshot, there are lines across 3 of the sides of the app. Those are timers. I know what the ones on the left and right do, but I’m not actually sure what the one at the bottom does offhand. I’ve been struggling with whether to implement timers in Oppo-Citrus, so that is a topic of interest to me.

Anyway, TouchArcade has been giving a lot of love to action puzzle games lately, with their recent review (which couldn’t have been more positive) and subsequent creator interview for the slide-a-row RPG 10000000. 10000000 looks to do for slide-a-row what Dungeon Raid did for the drag-over-like-colors-to-remove mechanic, which is to say, it just slaps D&D/RPG elements all over it. (Someone mentioned Dungeon Raid at our MN Game Devs group, and I had to admit I had just totally forgotten about it.)

I could probably have given “Action Puzzle Games with RPG Elements” its own page in the slide-deck. The first one I remember playing was Puzzle Quest, and it and its sequel have a presence in the app store, (although they’re not great ports, was my impression). TouchArcade also recently reviewed Puzzle Dungeons (which is free), and unfortunately after checking it out for a bit I’ve concluded it doesn’t add terribly much to the subgenre. (But it is a solid game if you can’t get enough match-3.)

TA also previewed what looks to be an original action puzzle game I can’t wait to try (looks like it just came out today) for the iPad called Slydris.