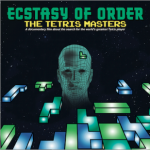 I saw the movie Ecstacy Of Order: The Tetris Masters tonight, a documentary about the first “Classic Tetris World Championship” held in (I believe) 2010. Like Word Wars (2004, about Scrabble) and King of Kong (2007 about Donkey Kong) before it, we learn something about the lives of specific characters who take part in this tournament of experts, in this case expert game players of the classic (original) version of Tetris for the Nintendo Entertainment System. Also like it’s spiritual predecessors, the documentary mostly succeeds because of the intriguing nature of those characters.

I can’t really recommend this movie highly enough. It far outstripped my expectations, (which admittedly were pretty low), and actually made me want to evangelize the movie, as well as, of course, go home and play some Tetris.

2 thoughts on “Ecstasy of Awesome”